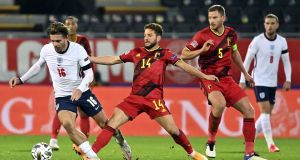 England’s Nations League dream is over but, really, that has long been of secondary importance. What Gareth Southgate has wanted this season as he looks ahead to the serious business of the European Championship finals next summer has been cohesive performances, particularly against the better opposition.

They do not come much stronger than Belgium, who sit atop the Fifa world rankings, and there had been the hope that England could get on to the front foot and ask questions of them in a way that they did not truly do in the reverse fixture last month, even though they were victorious.

It was a strange night because, although England lost, there were things to like about the display. Southgate’s players got into dangerous areas, they had chances and shots and, after his starring performance in last Thursday’s 3-0 friendly win over the Republic of Ireland, Jack Grealish once again looked the part on the international stage.

What England lacked was cutting edge and despite their territorial dominance, particularly in the second-half, there was the sense that a savvy Belgium team were happy to sit deep and see the game out.

They had taken control through first-half goals from Youri Tielemans and Dries Mertens and, try as England might, they could not produce a decisive moment in the final third. As ever for Southgate, it is a question of balance. He heads back to England and next Wednesday’s tie against Iceland with plenty to ponder.

Southgate’s lineup was influenced by who he did not have, with Raheem Sterling having joined a lengthy list of absentees before kick-off with a minor calf problem. Without Sterling, England were one short of the permitted 12 substitutes and, in his absence, Southgate persisted with Jack Grealish on the left. The manager’s major decision was to prefer Mason Mount to Jadon Sancho on the right. With Harry Kane winning his 50th cap at centre-forward, it was a front three of technique and nuance.

As at Wembley, Belgium took an early lead and the breakthrough goal owed a good deal to their desire to press high up the pitch. England tried to play out from the back, with Eric Dier looking for Mount only for Jan Vertonghen to nip in, win the ball and initiate a quick transition. They worked it up to Romelu Lukaku who found Tielemans and his low shot took a slight deflection off Declan Rice and then a bigger one off Tyrone Mings to beat Jordan Pickford. The England goalkeeper got his fingertips to the ball and diverted it against the post and in.

Belgium felt emboldened to play a high line by England’s lack of pace up front and, if their second goal was a beauty – a free-kick curled up and over the defensive wall by Mertens and beyond Pickford’s dive – it was frustrating for England on more than one level.

Southgate’s team had carried the fight and looked dangerous, with Grealish lively and Kane threatening. England also wanted to know if the free-kick should have been awarded. Rice’s howl of anguish after he was adjudged to have fouled Kevin De Bruyne as the Belgium midfielder unloaded a shot told its own story. Rice knew that he had got a touch to the ball before he made contact with De Bruyne and the TV replays backed him up.

England created chances in the first-half. The closest they came was on 12 minutes when Kane beat Jason Denayer to meet a corner. The header was going in, past Thibaut Courtois, only for Lukaku, having dropped back to cover the post, to head off the line.

England had their moments in open play, too. Grealish was denied by an excellent Toby Alderweireld block after closing in on a Kieran Trippier cross and he would have another shot blocked; Mount volleyed high from a Grealish cross and Courtois denied Kane at close quarters.

Southgate favours Jordan Henderson and Rice in central midfield at the moment but are they creative enough against the best opposition? He swapped Henderson for Harry Winks at half-time in the search for greater penetration and England continued to press on the front foot.

Grealish worried Belgium when he ran at their defenders and he was fouled repeatedly. When he was on the ball, it felt as though he could make something happen. Mount and Trippier wasted free-kicks in good positions while Kane scuffed a shot when well-placed after a fine flick by Mount. Grealish also made room for a shot only to curl off-target.

Southgate had been forced to replace the injured Ben Chilwell with Bukayo Saka in the first-half and his changes towards the end were attack-minded, getting Sancho on for Trippier and Dominic Calvert-Lewin for Mount while retaining the 3-4-3 shape.

England missed too many final passes or actions, with Rice blowing one possible counter and Kane twice shooting off-target, the first after a wonderful flick and run by Grealish. Belgium might have got greater reward for a disciplined performance only for Pickford to save smartly from Lukaku and the striker to lash wide late on. - Guardian

1 Sordid murder of hurling brothers still resonates in south Galway
2 Ireland’s autumn of discontent continues with abysmal Georgia showing
3 Ireland 23 Georgia 10: How the Irish players rated
4 Jim McGuinness: There is a way to save championship and make it competitive
5 Ireland grind their way to grisly win over Georgia
Real news has value SUBSCRIBE
Crossword Get access to over 6,000 interactive crosswords