Remember, these are not competitive internationals with tournament qualification at stake 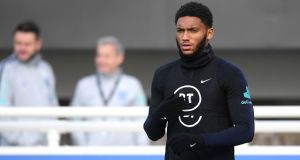 England’s game against Iceland could be played in Albania because of a mutated strain of coronavirus found in Danish mink farms. There you are: a perfectly normal English sentence.

As a result a number of Premier League players, including Andreas Christensen and Kasper Schmeichel, pulled out of the Denmark squad for the international break, because of UK government regulations that would have required them to quarantine for two weeks on their return.

A reasonable and proportionate safety precaution in the middle of a global health crisis, you may think. Not in the view of the Danish FA. “We regard the decision of the English authorities as too violent and far-reaching,”said their chief executive, Jakob Jensen, moaning that the UK government’s restrictions had forced them to call up nine additional players and field a weakened team. Well, we’ve all had to make certain sacrifices this year. Just ask the mink: around three million have been culled in the past few weeks.

And so on Wednesday night, a depleted Denmark played a depleted Sweden in a behind-closed-doors friendly in Brondby. Owing to quarantine restrictions and positive tests, around 20 players were unavailable to the Denmark coach, Kasper Hjulmand, who was isolating, as was his assistant Morten Wieghorst. Sweden were missing their England-based players Victor Lindelöf and Robin Olsen, as well as their manager, Janne Andersson, after a member of his family tested positive for coronavirus.

All normal. All fine. Last week Roberto Mancini was diagnosed with Covid, putting the Italy manager out of their matches against Estonia and Poland. Many of the 41 players he has selected are awaiting clearance to join the squad after positive tests were recorded at six Serie A clubs. Lazio have been accused of playing three players, including Ciro Immobile, against Torino while they had Covid.

Nothing to see here. Move along. Wednesday night had a full programme of friendlies taking place against a backdrop of fresh withdrawals, fresh infections and the advancing second wave of the pandemic. Joachim Löw’s first Germany training session this week featured eight players. Two Czech players have returned positive tests. On Thursday night, Bosnia-Herzegovina – missing Edin Dzeko because of coronavirus – will host Iran, where Covid cases have doubled in the past two weeks.

You get the idea. Remember, these are not competitive internationals with tournament qualification at stake, but friendlies: football with no prizes, no points, no intrinsic jeopardy and very little extrinsic quality.

Not merely bad football or meaningless football but potentially dangerous football, football happening for no reason other than because somebody somewhere has decreed that football must happen. Despite the evident absurdity of playing international football while societies the world over are locking themselves down, nobody seems to be able to arrest any of this.

According to reports, the FA would have been on the hook for a seven-figure refund to broadcasters had it not been able to schedule a friendly at Wembley on Thursday so, after first-choice New Zealand pulled out, step forward the Republic of Ireland. Football must happen, however unwanted, however injurious to the sore and exhausted players.

This is not simply pure greed, but pure vanity, pure compulsion, pure narcissism: a game so enamoured of the sound of its own silence it cannot imagine a world that might function without it. The big leagues, the Champions League, the Euros: these were always going to plough on regardless. But it is the refusal to countenance losing even the most minor and ephemeral parts of itself – the international friendly, the Papa John’s Trophy – that is the measure of football’s abusive self-addiction.

Part of the problem is football’s decentralised structures, a disparate and self-interested power grab when everyone agrees on the need for a smaller and more rational calendar, as long as the cuts fall somewhere else. Big clubs will rail against the bloated international schedule while quite happy to contemplate an expanded Champions League.

National associations will pay lip service to player safety while content to stuff their pockets with meaningless friendlies. This week the France manager, Didier Deschamps, announced his solution to the crowded calendar: cutting the number of teams in Ligue 1 from 20 to 18.

Germany’s friendly against Turkey last month drew the lowest TV ratings for a national team game in the 21st century. This week, the players’ union, Fifpro, warned that under the current calendar fatigued players will not be able to perform at their best in Euro 2021 and the 2022 World Cup.

Meanwhile, all around us the football continues to happen, football in great yawning waves, football pouring into our homes and our phones like torrential rain and we tell ourselves: this is all normal. This is all fine. - Guardian