Ferguson to remain in charge of Everton for Arsenal clash 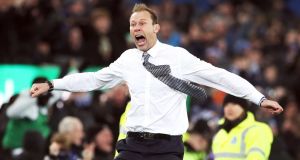 Duncan Ferguson will stay in charge of Everton for their Premier League clash with Arsenal on Saturday.

The Scot has been in the hotseat for the last three matches following the sacking of Marco Silva, earning a win against Chelsea and a draw with Manchester United in the Premier League prior to Wednesday night’s penalty shoot-out defeat by Leicester in the Carabao Cup.

There have been strong reports that Carlo Ancelotti is close to agreeing a deal but, should that happen over the next few days, his first game would now be the St Stephen’s Day trip to Burnley.

Asked about the issue following the Leicester match, Ferguson said: “I would think I’ll be in on Saturday because it’s such a quick turnaround. We’ve got a massive game and we’ve got to be ready.”

Having stepped in following Silva’s sacking with Everton in the bottom three, Ferguson has re-energised Goodison Park and believes Ancelotti, providing the deal goes through, will take over a club heading in the right direction.

“They’ve got a great team spirit now and I think there’s something to build on,” he said. Of course, when a new guy comes in, he’ll have his own ideas, I’m sure he’ll be looking to the January transfer window.”

Leicester boss Brendan Rodgers expects to see Ferguson given a chance at the permanent role himself in the future. The Toffees fought back from two down to force a draw with Leicester at Goodison Park only for the Foxes to win 4-2 on penalties.

A stunning equaliser from Leighton Baines at the end of normal time sent Ferguson sprinting down the touchline to celebrate with a ballboy, as he had against Chelsea, and the Scot was close to tears in his post-match press conference.

Rodgers said: “He was great on the touchline. We were having some chats. He’s a true Evertonian, he loves the club, he’s got a passion for the club, but he’s also a very good coach, he’s been coaching a long time.

“He’s been given the task of overseeing the team and you can see his pride and his passion. He’s done absolutely brilliant to galvanise the team over these last few games.

“They’ve got some really good results and, if it’s not his time this time, then I’m pretty sure in the future it can be because he has the real DNA of Everton. You see that in the team, you see the spirit of the players and I think he’s deserving of his chance at some point.”

The emotional rollercoaster of Wednesday night did not put Ferguson off.

“I think in the future I’ll look to go down that road,” he said. “Of course I’ll continue my education. I’ve loved every moment of this.

“Obviously the first two results help and I’m proud of the second-half performance. I’m devastated for the fans not to get to the semi-finals.”

Ferguson, meanwhile, praised Moise Kean for his reaction to being substituted against Manchester United. The young forward had only come on in the 70th minute at Old Trafford but was sacrificed with Ferguson looking to see the game out after United equalised.

Kean was given another chance as a half-time substitute against Leicester and had a much happier experience, particularly with a turn, run and cross that created a chance for Dominic Calvert-Lewin.

“I spoke to him,” said Ferguson. “No problems at all, he was on board and I thought he did well. I played him through the middle and he contributed. Fair play to him, a good reaction.”

Leicester will be favourites to make their first major final since they won the League Cup in 2000 when they take on Aston Villa over two legs next month.

Rodgers said: “Everyone wants to win trophies but we have to fight, we’re not entitled to win. Of course when you can win a trophy it gives you that hunger for more but we’ll see.

“We’ve got a tough game now against Aston Villa over two legs, but, if we can play as well as we have been this season, it gives us a chance to get to the final.”

1 Nicholas Quinn: ‘Swimming became how I dealt with grief’
2 Ian McKinley: ‘You do take for granted the simple things in life’
3 Reality Bites – Tales from the new normal: Caitríona Cormican
4 James McClean still failing to learn his own online history lesson
5 A beautiful, happy accident - Moneyball is the best sports movie ever
Real news has value SUBSCRIBE