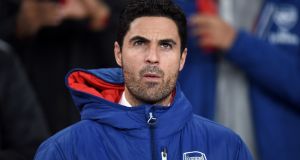 Mikel Arteta: Can Wenger, Guardiola and Pochettino – Arteta’s heavyweight backers – all be wrong? Each of them says Arteta has the ability to succeed as a manager. Photograph: Andrew Matthews/PA

When Mikel Arteta announced his retirement as a player at Arsenal in May 2016 he had the offer of a coaching role at three Premier League clubs. One was Arsenal; the others were Manchester City and Tottenham.

“I don’t want to say which clubs but I have three very different options and I am very proud, because it is not common,” he said at the time. “I have been left the door very open [at Arsenal] and I may have to make a decision.”

When Arsène Wenger left Arsenal at the end of the 2017-18 season, Arteta was prominent on the shortlist to take over as the manager. Towards the end of the process it appeared the job was his. Yet the three-man selection panel of Ivan Gazidis, Sven Mislintat and Raul Sanllehi would prefer Unai Emery, who they felt was a safer pair of hands.

Did somebody get cold feet and, if so, who?

Gazidis would insist he and his two colleagues had each placed Emery at the top of their lists, although he had to say that, really. A little while later Gazidis had departed for Milan. The Wenger succession was sorted. His work was done. Mislintat would also leave – in February of this year.

Whatever the ins and outs, Arsenal had passed over Arteta.

Now they are primed to get him. The man whom they did not fight hard enough to recruit as a coach and did not want badly enough as a manager a little over 18 months ago is set to be confirmed as the permanent successor to Emery.

What has changed? Because one thing is plain: Arteta has still done nothing as a manager, even if he has had another season and a half to work under and learn from Pep Guardiola at City.

Perhaps the post-Wenger recruitment process was so awesome that Sanllehi, the remaining link to it, did not feel they had to deviate too far from it this time. Just bump up the next guy. Gazidis had made it clear the process had been exhaustive. Maybe other candidates – and Arsenal have explored several – were unavailable in mid-season.

Arsenal are no strangers to decisions that do not bear scrutiny. After sacking Emery, they asked Freddie Ljungberg to step in as caretaker, working alongside Per Mertesacker, who is the academy manager, and a skeleton staff. Ljungberg, who had never previously managed, pointedly said Arsenal needed “to have the same resources as other clubs”. The impression was they were happy to busk it with Ljungberg only for results to remain poor.

Arsenal’s route to Arteta has been circuitous, a little unwieldy, and it is hard to see his appointment as anything other than a gamble – given he has never been a manager before.

There is a big difference between being an assistant coach and the main man. Now, for example, he will have to deal directly with the repercussions of not selecting a player while troublesome matters such as contractual stand-offs – an Arsenal speciality – will enter his sphere. He will have to man-manage Mesut Özil.

Look at where Arsenal are – not only in terms of Premier League position and European status but their identity as a team. That identity is jumbled, to say the least. Arteta’s challenge is to reboot one of England’s leading clubs, to fix a number of ills and to stay on the right side of the demanding Emirates Stadium support. Just to repeat: he has never been a manager before.

And yet Arteta’s return has fired the imagination, bringing that most precious of commodities – hope. For many years, Arsenal’s biggest problem has been the collective mentality; the sense they are simply not tough enough to recapture past glories.

Arteta is Mr Mentality. An incredible professional during his playing days, who drew every last drop from his talent, he has taken his confident and clear-eyed approach into coaching. Towards the end of his career as a midfielder, as the injuries bit, he started to think more as a coach. He knew where he was going and what he wanted.

The Spaniard has always been a leader and, crucially for his new role, a good communicator. When the chips were down at Arsenal, Arteta was invariably the player – together with Mertesacker – who fronted up to the press. A small detail, perhaps, but undoubtedly a sign of character.

Can Wenger, Guardiola and Mauricio Pochettino – Arteta’s heavyweight backers – all be wrong? Each of them says Arteta has the wherewithal to make it, with Pochettino, the former Tottenham manager, seeing something in him when they first met as players at Paris Saint-Germain.

The noises from the City training ground have been uniformly positive, Arteta having impressed with his attitude, progressive ideas and attention to detail.

Arteta knows Arsenal from his five years at the club as a player and he is acutely aware of what needs to change, even if it takes time, which is rarely the ally of a manager at a big club. It feels as if it is a good fit, a daring and exciting move. The theory faces the real-world test. – Guardian