Mikel Arteta to be confirmed as new Arsenal manager 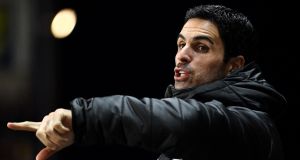 Mikel Arteta is set to be confirmed as the new Arsenal manager.

Arsenal are on the verge of confirming Mikel Arteta’s appointment as their head coach but he will watch Saturday’s match at Everton from the stands.

Arteta has agreed a contract, believed to run until 2023, to take over from the sacked Unai Emery, and is expected to sign on Thursday. A formal announcement will follow, with the former Arsenal captain officially presented in a press conference on Friday.

The Everton game comes too soon for Arteta to take hands-on control, however, with Arsenal’s players travelling to Merseyside on Friday lunchtime and little chance for the new manager to oversee training. Barring a late change of heart he will leave the team’s operations to Freddie Ljungberg, who has overseen their last five games, and observe from the sidelines. The match at Bournemouth, on St Stephen’s Day, will be the first at which he takes full control.

The deal will go through despite unhappiness from Manchester City about Arsenal’s conduct throughout their courtship of Arteta. City were angry that, from their point of view, Arsenal had made no formal contact about their wish to hire Arteta and cautioned that, until a seven-figure compensation fee was paid, he would not be released. But the icy relations have proved no barrier to getting the deal done and Arteta’s return will soon be rubber-stamped.

Everton have said that Duncan Ferguson will continue as caretaker manager against Arsenal. Carlo Ancelotti is expected to take over from him before their St Stephen’s Day game at home to Burnley. - Guardian

1 Avoid the treadmill at all costs – marathon training in the 2km radius
2 Reality Bites – Tales from the new normal: Shane O’Donnell
3 Son Heung-min to carry out mandatory national service in South Korea
4 Sonia O’Sullivan: Taming The Tan gave us one last roll of the dice before shutdown
5 Rich Premier League clubs way off the mark in cutting staff pay
Real news has value SUBSCRIBE
Crossword Get access to over 6,000 interactive crosswords