Emmet Malone: The only positive is that FAI has sunk so low the only way is up 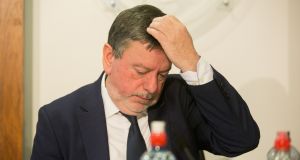 If there was one tiny positive to emerge from this latest in a long line of eventful days for the FAI, it was that Minister for Sport Shane Ross finally found some common ground with at least one of the leading officials at the association he has been at odds with for so long. Both he and its vice-president, Paul Cooke, reckon the organisation has finally hit “rock bottom”.

Their assessments came as the association’s board reported a loss of €8.9 million for last year, acknowledged that total liabilities have reached €55 million and admitted that the previous two sets of accounts, the ones for 2016 and 2017, had between them painted an excessively rosy picture regarding the state of its finances to the tune of almost €8 million.

Its auditors had signed off on those without any apparent reservations at the time, but they were far more reticent here, unable it seems even to say that the Irish game’s governing body can reliably be viewed as a going concern, something its directors insist they are far more confident about.

Their plan, one they say they are well down the road with, is to abandon the misguided attempt by John Delaney to pay off the stadium debt by 2020 and instead take out a 15-year mortgage for the €32.2 million still owed. They are also, they say, at an advanced stage of speaking with the bank about putting in place the arrangements required to allow them meet their day-to-day commitments. The intention is that the deal will guarantee their financial stability until 2022/23.

He and association president Donal Conway acknowledged that staff had been told this week that there would be “consequences” arising out of the damage done already.

And though everybody seemed to know this means significant numbers of job losses, nobody seemed to feel that this was the time to get into specifics.

There will be justifiable anger amongst the association’s 200 staff as they head into Christmas facing the prospect of losing either their livelihoods or colleagues as a result of the mismanagement and greed that the results published here have revealed.

Delaney’s avarice was certainly highlighted by the news that on top of his substantial salary, he was due very substantial pension contributions. Then there was the “rent, cars . . . some personal payments,” as Cooke summed it up.

That the board allowed this all to happen, much of it by agreeing a deal with the association’s former chief executive the true terms of which most of them were not aware of, probably says all you need to know about the quality of governance around the place.

Its president, Donal Conway, suggested that he still thought that Delaney was being paid €360,000 per annum but said that having reached the “milestone” of being able to present more accurate accounts, he now feels he can resign his position satisfied that he has played some part in repairing all of the damage that was done over the past few years.

“I’m leaving my position earlier than I should have,” he said. “That’s an acceptance of that collective failure of a board that I was a part of.

“Other than that, it’s for other people to judge, but I don’t think that any of the other work that I have been involved in is destroyed because of that,” he continued.

“There are investigations ongoing. When they reach their conclusion, the truth will be out there. People will know who did what. My guilt is not a sin of commission, it is a sin of omission. That’s how I would describe my time on the board.”

His fellow director, John Earley, was less inclined to shoulder any share of the collective blame, insisting that he was a late arrival to the board (he did join in 2015, after Delaney had been given his new deal, but gave little or no indication from that point on that he had any reservations about Delaney’s leadership) and that when he had asked questions, he had been misled.

“The people who were coming to us with the information were economical with the truth,” he said. “So if had had the right information, we could have voiced a stronger opinion on it.”

He expressed the hope that the new board can continue to move forward and gave every impression that he sees himself as having an ongoing role in the process.

That may be viewed as rather less welcome by Ross than Conway’s impending departure, but there are wider signs of progress here.

The independent directors, it was said, may come on board now that the true financial situation has been made public, perhaps in time for the reconvened agm on December 29th.

That in turn may strengthen the case for the restoration of much-needed public funding.

Cooke described it all as a “key moment” for the association – by which he presumably meant the one when it has finally sunk so low that the only way now would be up.

We shall see, but there was certainly an overdue sense of some uncomfortable truths being told.