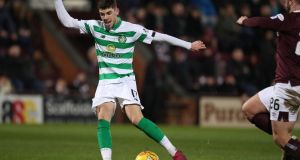 Celtic recovered from a slow start to beat Hearts 2-0 at Tynecastle and move five points clear at the top of the Scottish Premiership.

Ryan Christie netted with the champions’ first shot on target in the 28th minute and Olivier Ntcham doubled the advantage with an expert first-time finish five minutes before the break.

The visitors had further chances but Hearts gave new boss Daniel Stendel some encouragement with the way they kept on trying to get back into the game after losing their shape for the period between the opener and half-time.

The result ensured Celtic utilised one of the games that was rearranged from their League Cup run with Rangers now on a game in hand. Hearts avoided going bottom by one goal but face basement side Hamilton on Saturday.

Stendel made five changes after his side delivered a limp display in a 1-0 home defeat by St Johnstone in his first match. Joel Pereira, Jamie Brandon, Craig Wighton and Loic Damour came in and Jake Mulraney returned from suspension, while right back Michael Smith moved into midfield. Jamie Walker missed out completely.

Christie and Ireland international Jonny Hayes came back from injury for Celtic, who struggled to get the ball down from the start, although Ntcham was an exception.

Stendel got the effort and fight he had demanded as Hearts started on the front foot, turning the Celtic defence whenever they had the chance.

It was pretty basic stuff but the long-suffering home fans roared their approval and Oli Bozanic managed a couple of decent efforts – a low shot that Fraser Forster held and a header which glanced not far wide.

The Australian also squandered some set-pieces and Hearts found themselves behind against the run of play.

James Forrest played a one-two with Odsonne Edouard to put Hearts on the back foot before Christie took over and drilled a 20-yard strike just inside the post.

Forrest had drifted inside limping right back Brandon and Stendel swapped him for Sean Clare, who was booed on by a small section of the home fans. Despite Smith’s presence, Clare lined up at right back and Celtic began cutting open the home defence at will.

Edouard was sent clear after Callum McGregor dispossessed Smith but the Frenchman took a heavy touch. Forrest missed the target after a one-two with Ntcham left him one-on-one with Pereira.

Hearts were exposed again moments later when Scott Brown won the ball and released Forrest, whose low cross from the left was swept home first time by Ntcham.

Stendel replaced Bozanic with Ireland midfielder Glenn Whelan at half-time and his team rediscovered their early impetus with Clare coming close after a positive run into the box.

Hearts also delivered some decent balls into the box but they were living dangerously at the back.

McGregor was flagged offside after netting from close range and Edouard headed against a post before forcing a good save from Pereira after being left unmarked from a free-kick.

Stendel was forced into another change on the hour mark when Mulraney limped off and Pereira came to the hosts’ rescue again after Forrest played in McGregor.

Hearts rallied and pushed Celtic back for much of the final quarter without troubling Forster.

Sideline Cut: The fascinating final chapter in Tiger’s tale left in limbo for now 11:06
Simon Zebo: ‘It’s been tough not being able to put my hand up to play with Ireland’ 08:00
Matt Williams: The economic earthquake for European rugby is coming 07:00
Sporting Poetry: Seeing far beyond the scoreboard 06:00
Premier League 2019/20: End of season (for now) report card 06:00

1 Simon Zebo: ‘It’s been tough not being able to put my hand up to play with Ireland’
2 Matt Williams: The economic earthquake for European rugby is coming
3 Cheltenham faces criticism after racegoers suffer Covid-19 symptoms
4 Pat Critchley: ‘You teach or coach the person first and the subject or the game second’
5 Ian O’Riordan: Learning to run for the first time all over again
Real news has value SUBSCRIBE
Crossword Get access to over 6,000 interactive crosswords