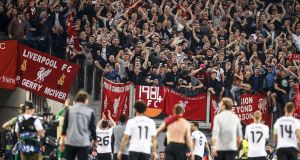 It was, of course, never in doubt. Or perhaps only a little in doubt in those moments when Roma pressed and suddenly Liverpool’s defence began to look alarmingly zany, pockets of space opening up as though subject to a sudden buckling of the earth’s crust.

Certainly the Champions League has never known anything like this. A 4-2 victory for Roma brought to an end a double-header that has seen 20 goals scored in two semi-finals, capped by a pair of hysterically open second legs. Defending is over. Clean sheets are over. Pour it on, let it burn. Elite club football has never looked quite so drunk on space, intoxicated by the urge to play only in forward gear.

Not that any of this will take the gloss from a wonderful moment of triumph both for Liverpool and indeed for the Premier League, which has missed this stage. At the end of a sweaty, boisterous, agreeably open night in Rome that long march to the final continues. From Hoffenheim in August, through Spain, Russia, Slovenia, Portugal, Manchester and Italy. And followed now by the trek east to Kiev and the Soviet-scale stage of another, even more oppressively huge, Olympic Stadium.

Before kick-off Rome was its usual beautiful, muggy, flaneurial self, despite the large police presence on the streets. On the bridges across the Tiber, Roma fans lounged carelessly, with the Stadio Olimpico a surprisingly green and fragrant kind of place, even on a day of high alert.

Jürgen Klopp was faced with a teaser. To stick or twist: to hang on to the 5-2 riches of the first leg or to seek a little more, knowing that under pressure Liverpool’s defensive line is likely to offer up those same spaces “as big as the Mersey” he would talk about at his press conference two hours later.

This is the question Liverpool now face, a quandary that will hang over their prep for Kiev in three weeks’ time. Real Madrid press with a murderous intent through those channels where Liverpool are weak, ganging up in the full-back areas, punishing every moment of hesitation. Klopp’s team have just conceded six goals to a moderate Roma. They are going to need a bigger boat.

In particular Klopp will puzzle over the full-back positions. Trent Alexander-Arnold had a difficult game in Rome, something that will have been noted by those ruthless white-shirted opponents to come. Madrid score a huge number of goals from crosses. Quite what Kiev might bring if the right flank is left this open once again is a hair-raising question given the ruthlessness of Cristiano Ronaldo and Marcelo on that side.

“Incubo Rosso” was the headline in the Corriere dello Sport, a reference to Roma’s evisceration in the first leg, but also an imprecation to their own team to create something similar inside this beautiful, open, flying saucer of a stadium.

And in those opening moments Roma did press hard, looking to play diagonal balls in behind Alexander-Arnold, who scurried and hustled and just about hung in there. He was lucky not to give away a penalty for handball later. His passing went awry. It was a little painful at times. But Klopp kept him out there until the dying moments and after the final whistle it was Alexander -Arnold, the local kid, so full of life when he presses forward, who led the Liverpool huddle across the advertising boards and into a delirious moment of communion with the travelling fans.

There is more, at times, to being part of a team. But this is rarefied air and Klopp will have a few weeks now to ponder how to close those spaces, to minimise the damage that will inevitably come.

On the other flank Andy Robertson was his usual fine, physically relentless self. The moment that effectively killed the tie after 25 minutes was largely his work. With the score 1-1 Robertson sprinted out wide to keep the ball in by the touchline and then drove on, skating in thrilling fashion outside Alessandro Florenzi, a wonderful moment of adventure and brio. From the ensuing corner Georginio Wijnaldum headed in.

Earlier Sadio Mané, man of the match on the night, had given the visitors the lead from another of those familiar breaks, three or four Liverpool players sprinting together, chest to chest, like an early heat in the men’s 60-metres dash. This time they were helped by Radja Nainggolan giving the ball straight to Roberto Firmino 40 yards from goal. Don’t do that. Don’t give the ball to Roberto Firmino 40 yards from goal. We know how this ends by now.

After which Liverpool hung on, with enough in the tank to still take a tie they lost 6-2 over the final 110 minutes. But then for this team there is only one way: that of power chords and face-melting solos.

Liverpool could choose to blink now, to seek that middle ground of damage-limitation. Or they could simply lock the wheel and go careering out over the edge of the cliff, silk scarves fluttering. In the year of breathless attack it would be a fitting moment to keep on driving, eyes fixed in front, towards a final that promises more space, more spills, and a shared surge to the line. – Guardian service