A Leander Dendoncker own goal had put the home side ahead 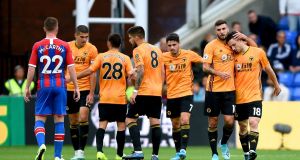 Wolves’ winless start to the season continues but the visitors will leave Selhurst Park the happier team after Diogo Jota’s last-gasp equaliser.

Leander Dendoncker’s unfortunate own goal just after half-time looked destined to condemn them to defeat before the Spaniard pounced on Joel Ward’s mistake, who ended the villain after his shot had forced the opening goal.

Wolves had the better of the first half, carving out three clear chances to score, but lost belief and discipline after falling behind when Ward’s shot from 12 yards flew off Dendoncker and squirmed beyond Rui Patricio. Romain Saiss was sent off for two bookings, each for lumbering challenges on Wilfried Zaha.

Palace pushed for a second, but paid for their own profligacy in front of goal when Jota kept his composure after Ward’s slip in the area, firing the ball high beyond Vicente Guiata to salvage a point from what would have been a painful defeat. – Guardian