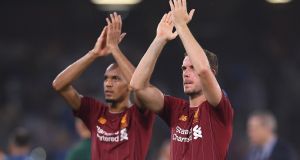 A Liverpool fan was taken to hospital with head injuries during the team’s Champions League defeat in Naples having been assaulted in a bar hours before kick-off.

Two Liverpool supporters were attacked in the Italian city at around 2pm on Tuesday by a group of men on scooters wielding belts. The pair were treated at the scene but one, a 26-year-old, later collapsed at the Stadio San Paolo and spent the night in hospital. He was discharged on Wednesday morning.

Liverpool’s chief executive, Peter Moore, named the fan, whom he visited in hospital, as Steven on social media. A club spokesperson said: “We can confirm that one of our supporters was taken to hospital last night following an unprovoked attack prior to kick-off in Naples.

“The club has been working with Merseyside Police and the local authorities in Naples to establish the facts. The supporter remained in hospital overnight for observation and was discharged earlier this morning having been given the all-clear by medical staff.”

Merseyside Police have confirmed that a 46 year-old man was also assaulted in the incident. – Guardian