Lethargic Manchester United put to the sword by West Ham

Problems mount for Solskjaer as Yarmolenko and Cresswell strike for Hammers 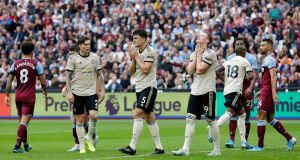 For Ole Gunnar Solskjær and Manchester United, it was one of those flat and underwhelming performances that highlight how far off from top they have fallen and why the fight to reacquaint themselves with Champions League football this season promises to be so fraught.

West Ham were comfortable after Andriy Yarmolenko’s fine goal just before the interval and the impression was that United could have played all day and failed to find the equaliser. The gloss to a win that bolstered West Ham’s early season positivity came late on when Aaron Cresswell picked out David de Gea’s top corner with a beautifully executed 25-yard free-kick and, in a heartbeat, the United inquest could begin.

Solskjær had injury problems and they would worsen when Marcus Rashford was forced off with a groin complaint. But the team he sent out singularly failed to impose themselves, lacking tempo and incision in the final third. This was a performance scarred by sloppiness, by errors, and the club’s away days woes go on. They have lost four and drawn three of their last seven Premier League games away from Old Trafford, equalling their longest run in the competition without a win.

West Ham have not enjoyed a particularly good recent record against the established top six – this was only their fourth win in 21 fixtures – but the home crowd could bellow out the Olés at the end while United’s Ole cringed in embarrassment.

United had suffered here last September in a 3-1 defeat that widened the cracks of the José Mourinho era and it was a similar story again. Mourinho was watching as a TV pundit and it is fair to say he would not have wanted to dwell on that day, when he started with Scott McTominay on the right of a back three and watched his one-paced team show a basic lack of hunger and drive.

Solskjær played McTominay in a central midfield two alongside Nemanja Matic – in the continued injury-enforced absence of Paul Pogba – believing that it gave United the foundation to play but one of the big questions was always going to be whether his lineup had the energy and creativity to hurt West Ham. Anthony Martial was also unavailable and from the early stages it felt as though Rashford would have to feed on scraps. So it proved.

Manuel Pellegrini’s team had a nice balance, with Declan Rice in front of the back four and menace from the flanks in Yarmolenko and Felipe Anderson. West Ham have often proved a tough nut to crack this season and for long spells the action meandered.

United wanted to counterattack but only once in the first-half did they threaten to quicken the pulses of their supporters. Daniel James turned sharply to find Rashford and, when Issa Diop missed his slide challenge, the United striker had yards to sprint into. Rice, though, had read the danger. He eased back and across to snuff out Rashford, a celebration of understated efficiency.

West Ham sought to keep the back door closed by whatever means necessary, with Angelo Ogbonna taking out Andreas Periera to collect a yellow card as United broke and Diop flattening James after misreading a ball. Mark Noble was high and late on Aaron Wan-Bissaka in the 74th minute and was perhaps fortune to receive only a booking.

Who could find the key to the defensive lock? It was West Ham with a move of precision and quality just before half-time. With Pereira standing off him, Noble found Anderson and he was in perfect sync with Yarmolenko. When Anderson flicked the ball on his teammate was already on the move, using his first touch to power away from Harry Maguire. Yarmolenko’s finish was angled low into the far corner.

Solskjær sent his players out early for the second-half – a telltale sign of managerial dissatisfaction – but things got worse for him when Rashford pulled up in the 59th minute with a groin problem. He had played virtually every minute of United’s season up to that point, including the full game against Astana in the Europa League on Thursday. Did the strain get to him? With Mason Greenwood absent because of tonsilitis, Solskjær sent on Jesse Lingard to lead the line.

West Ham could sit a little deeper and look to counter and it almost bore fruit when Anderson played a give-and-go with Yarmolenko before working De Gea at the near post.

For United, Juan Mata stretched but could not apply a decisive touch to a Pereira cross while Maguire shot low and too close to Lukasz Fabianski on 69 minutes after a corner had been worked to him. It was a bad miss – entirely in keeping with United’s day. – Guardian