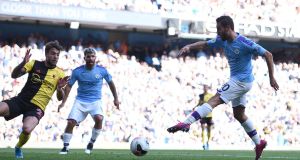 Champions Manchester City produced a stunning response to last week’s shock loss at Norwich as they they thrashed their favourite whipping boys Watford 8-0.

Bernardo Silva claimed his first top-flight hat-trick as Pep Guardiola’s side ran riot at the Etihad Stadium to move back within two points of Premier League leaders Liverpool.

Sergio Agüero – who might easily have had a treble himself in an embarrassingly one-sided encounter – also got on the scoresheet along with David Silva, Riyad Mahrez, Nicolas Otamendi and Kevin De Bruyne.

It was the perfect way for City to celebrate their 125th anniversary and a sobering result for the newly-reinstalled Watford boss Quique Sanchez Flores.

City could even have had more as they racked up 28 attempts on goal against the league’s winless bottom side, including two that hit the woodwork.

In their nine previous meetings since the Hornets were promoted to the top flight in 2014, City had scored 31 goals, including their 6-0 romp in last season’s FA Cup final.

They were even more rampant than at Wembley, where it took them 26 minutes to score their first goal, as they raced into a 5-0 lead inside 18 minutes.

Remarkably Watford almost replied immediately as Gerard Deulofeu skipped past an Otamendi challenge but his shot was deflected wide by Ederson.

That was as good as it got for the visitors as Agüero doubled City’s lead from the penalty spot on seven minutes after Mahrez was brought down by Ben Foster.

Mahrez was tripped again on the edge of the area five minutes later and he stepped up to fire in the resulting free-kick, albeit with aid of a big deflection off Tom Cleverley.

Bernardo Silva made it 4-0 with a simple diving header after Otamendi flicked on a corner and the Argentinian defender himself grabbed the fifth soon after.

Watford again switched off at a set-piece and Agüero broke clear to set up his countryman with a low cross to the far post.

It was certainly not a Premier League debut to remember for Watford right back Dimitri Foulquier and his embarrassment was completed when Flores substituted him after 33 minutes.

City did not score again until the second half but they could easily have been leading 8-0 at the break as Agüero shot wide when through on goal and then hit the post before forcing a good save from Foster.

Normal service was resumed after the restart as Bernardo Silva grabbed two more to claim a hat-trick.

Both were simple finishes in front of goal after being teed up by David Silva and De Bruyne respectively.

Agüero put another shot wide and Mahrez then headed against the bar as City showed the visitors little respite.

De Bruyne claimed the eighth with a thumping shot into the roof of the net five minutes from time and the Belgian almost made it a record-equalling nine moments later but dragged his shot wide.