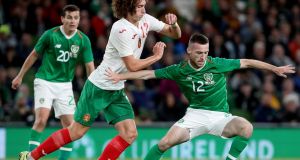 Stephen Bradley insists that Shamrock Rovers will not be selling Jack Byrne on the cheap after the midfielder enhanced his reputation by impressing in last week’s international game against Bulgaria.

The 23-year-old had a major hand in a couple of Ireland’s goals and clearly impressed Mick McCarthy with a performance that will not have gone unnoticed in England.

The Dubliner, who came up through the youth ranks at Manchester City, has made no secret of his desire to go away again in order to play at the highest level at some point, but Bradley says that having experienced the rougher side of life around the lower leagues, Byrne will not be pushing to get away before the right offer comes in.

“We are very comfortable with where we are with Jack,” said the Rovers boss.

“But he’s been around lower leagues; he’s been to Scotland, so he knows that this is as good as, if not better, than any of them.

“I remember being in Scotland and having to get changed in one place and get on a bus to train in another place, then we got to that place and there were kids playing so we had to move. When you go there and experience that then come back here and things are done right, you enjoy yourself, you enjoy your football and you enjoy your training.

“You’re calm and you’re composed and I think you can see that in him, how he carries himself, how he plays and then the other night, he comes on and shows everyone what he is about; he just grabs the game by the scruff of the neck and does what he does.”

Rovers have invested heavily in their effort to become a club that can generate a significant portion of their budget from player sales and have met with some early success, although the figures achieved for those who have departed over the past year or so have varied wildly according to the particular circumstances involved.

Byrne, though, increasingly looks as though he is someone who could attract really substantial offers. In the past, players in his sort of position have tended to be on short term deals with clubs here but he has two years remaining on his contract. British clubs have also routinely argued that the players being signed from the league here represent a risk as it is not clear whether they can raise their game to a higher standard, but the midfielder has already had a good season playing in the Dutch top flight, while he also got to address any lingering concerns in that half an hour against Bulgaria.

“But this isn’t just about Jack, this is also about what we’ve done with the last six players (who have moved on), it’s about creating a market for ourselves. It’s not about us putting our heads in the sand and saying we won’t listen to anyone.