Shamrock Rovers keep going though the race is nearly run 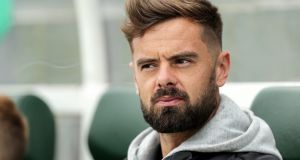 Shamrock Rovers midfielder Greg Bolger insists that there will be no shift in focus towards next weekend’s FAI Cup semi-final until league games against St Patrick’s Athletic and Dundalk are out of the way.  Vinny Perth’s Dundalk side will be celebrating another title if they take six points over the next four days.

However, Bolger says that having surrendered points needlessly during a shaky spell earlier in the season, all he and his team mates can do now is keep battling to win matches until the maths of the situation mean the race is officially over.

“No one has even talked about the cup,” says the midfielder, who expects to have signed a new deal with the Dublin club by the end of next week. “We are just concentrating on the game and trying to be as professional as we can.  “There was a spell in the middle of the season where we had a few injuries and suspensions, and we lost a few games in a row; to Bohs, Dundalk and Sligo. You look back on that period and you kick yourself a bit. But that’s what happens.

“All we could have done is come back the way we have, and with six games to go you don’t know. I’m not saying it’s over by any means – stranger things have happened. You look back on that period and it’s hard to take, but we’re looking forward to the next few games.”

Rovers will not be helped by the absence though injury of Joey O’Brien and summer signing Neil Farrugia, nor by the fact that Stephen O’Donnell’s St Pat’s side would significantly boost their chances of a place in Europe next season by springing a surprise this Friday and winning.

Yet Rovers’ bigger problem is Dundalk’s relentless knack for getting the right result. Last weekend’s League Cup final success made it 27 games unbeaten in all domestic competitions. They are four and zero in their previous meetings with Waterford, 13-1 in terms of accumulated goals. It would in the circumstances be a surprise if the champions are not playing to retain their title in Oriel on Monday, and if it is not won then they will have a few more cracks at it.

Perth will be without John Mountney and Jordan Flores for the trip to the RSC, but Alan Reynolds is missing Dean Walsh and Kenny Browne, while John Kavanagh heads up a list of players facing the prospect of late fitness tests.

The hosts are safe at this stage, but Finn Harps will still hold out hope of hauling themselves above Cork City if they can win at Turner’s Cross. They have yet to do it in three meetings this season, and their recent form is poor. However, the hosts have yet to win under Neale Fenn, and anxiety levels are about to be abnormally high around a club that would not have expected to find itself in this position.   UCD would like to see City pick up three points, but even then they would face an uphill battle and beating Sligo looks like a must.

Derry City, meanwhile, can leapfrog Bohemians in the race for third place and a Europa League spot by beating the Dubliners at the Brandywell. Manager Declan Devine says the game is bigger than the League cup final his side lost last weekend, but he must plan for it without Daren Cole (cruciate ligament) or Grant Gillespie (suspension). However, Greg Sloggett and Conor Davis come back into contention.