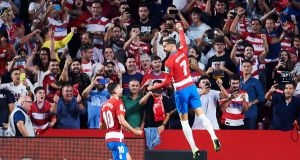 Granada took advantage of Barcelona’s troubles on the road to move top of La Liga with a 2-0 victory at the Estadio Los Carmenes.

Ramon Azeez and Alvaro Vadillo netted in either half to leave Barca, who started Lionel Messi on the bench, without a win in all four away matches this season.

A win against a side they have beaten 11 times in their last 12 league meetings would have taken Barcelona top of the table on goal difference.

But despite the introduction of Messi at half-time, it was Granada who took their opportunity to leapfrog Sevilla and Atletico Madrid to the summit.

The hosts went ahead in the second minute through Azeez. Roberto Soldado robbed Junior Firpo, fed Antonio Puertas and his cross was headed in by the striker from close range, leaving Barca trailing for the fourth time in five league matches.

Granada doubled their advantage in the 66th minute, Vadillo converting from the penalty spot following a handball from Arturo Vidal, who had just come on as a substitute.

The defeat sees Barcelona drop down to seventh in the table, three points behind leaders Granada, after suffering their second defeat in five league games.

Atletico were held to a goalless draw by Celta Vigo at the Wanda Metropolitano.

Blanco kept out Felipe’s header in the first half and then acrobatically tipped over Renan Lodi’s thunderous strike from distance.

Blanco also denied Koke while Lodi fizzed an effort across the face of the goal late on as Atletico, now third in the table, were frustrated.

Villarreal left it late to beat Real Valladolid 2-0 and move up to fourth.

The home side finally made the breakthrough in the 77th minute through Santi Cazorla.

The former Arsenal midfielder converted from the penalty spot after Javier Ontiveros was brought down by Mohammed Salisu in the area.

And after Ruben Pena hit the post with a stunning 25-yard volley, Ontiveros netted a second a minute from time.

The midfielder headed in his maiden goal for the club from Samuel Chukwueze’s cross to secure Villarreal’s first home win of the campaign.

Eibar are second bottom after a goalless draw with Levante.