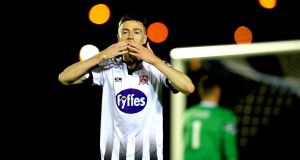 Dan Kelly’s latest goal of a prolific streak against Waterford has put Dundalk within touching distance of retaining their Premier Division title.

Kelly’s winner – his sixth goal against the Blues this term – means Vinny Perth’s side can clinch their fifth league in six years by beating Shamrock Rovers at Oriel Park on Monday night.

Tom Holland’s ball into the box on 12 minutes sprung Dundalk’s offside trap but Michael O’Connor delayed his shot enough to smother the danger.

Then Sam Bone missed a sitter by failing to connect with George Poyton’s free-kick.

Gradually, the champions began to assert their control and grabbed the winner seven minutes before the break.

Rob Slevin was far too casual in trying to side-step the attention of Pat Hoban near the left touchline and only succeeded in slipping.

As Waterford appealed vainly for a foul, Hoban cut in towards goal before squaring to Kelly for a close-range finish.

The concession deflated any early momentum generated by a Waterford side without a home win in the league since May.

Zack Elbouzedi wasted a good chance from a free-kick shortly after the restart by blazing the ball over.

At the other end, the slick movement of the champions always posed a threat on the counterattack.

Michael Duffy, having a quiet night aside from one first-half shot that veered over, darted to the end-line. His cutback found another speedster charging from the opposite side, Kelly, yet Kevin Lynch blocked the goalbound shot.

Vinny Perth had the luxury of leaving out Patrick McEleney but the playmaker was only on the pitch as a substitute when he tested Matthew Connor with a low curler.

The Blues mustered a couple of late half-chances. Substitute Shane Duggan scuffed his shot with eight minutes left and Lilywhites defender Dean Jarvis was on hand to block Bone’s effort after Gary Rogers had spilled a routine cross.

Bohemians produced a superb defensive display at the Brandywell to secure a share of the spoils to remain two points clear of Derry City in third spot.

Ravaged by injury at a vital stage of the season Keith Long will, no doubt, celebrate this scoreline as it keeps his unbeaten tag against Derry intact.

James Talbot proved to be the busier of the two goalkeepers as Derry dominated the clear-cut scoring chances but failed to breach a well organised defence.

Six minutes into the second half Bohs got the benefit of the doubt when Derry debutante Jack Malone was impeded by Paddy Kirk inside the area but well placed referee Paul McLaughlin refused to act much to the annoyance of the home side and supporters.

A superb break by Derry in the 62nd minute ended with David Parkhouse dragging his low shot wide of the Bohs net after Barry McNamee had played him in.

But Derry got the rub of the green in the 68th minute when Bohs had squandered the best scoring chance of the match.

Jamie McDonagh played a stray pass into the path of Bohs’ English hitman Andre Wright and when he played Luke Wade-Slater into a one-on-one situation with Peter Cherrie, the winger ballooned the ball over the crossbar when he really should have done better.

However, Rebel Army head coach Neale Fenn is still looking for a first win and the home side wasted good chances here, most notably a Conor McCarthy penalty three minutes into the second half.

Prior to that, City had had the better of the play but didn’t threaten much, Karl Sheppard with the best first-half chance as he flashed a shot wide. After Mark O’Sullivan was tripped in the area soon after the resumption, McCormack stepped up but Mark Anthony McGinley saved well with his leg and City didn’t have as good a chance after that.

In fact, Harps could have won it late on as Daniel O’Reilly twice went close, heading wide from a Tony McNamee cross and then drawing a fine save from Tadhg Ryan with a 25-yard shot.

Ultimately, it was a stalemate, as it had been at Finn Park in July, a result which almost certainly condemns Harps to the promotion/relegation playoff.

An own goal and the calmest of finishes from Romeo Parkes gave Sligo Rovers victory at the UCD Bowl, despite playing for 70 minutes with 10 men.

A fifth win over College this season was just the fillip Sligo manager Liam Buckley desired ahead of next week’s FAI Cup semi-final with Dundalk.

A 24th league defeat means bottom side UCD will effectively be relegated if they lose away to Finn Harps in a fortnight’s time.

Sligo started brightly with Dane Kane bringing an alert save with his feet from Conor Kearns in the UCD goal on 11 minutes.

Despite that, the visitors availed of a goalkeeping howler to snatch the lead on 33 minutes.

Under little pressure, Kearns came for David Cawley’s floated corner only to punch the ball into his own net.

UCD then got done on a counterattack right on 45 minutes.

Daryl Fordyce broke down the middle to put Parkes through to shoot home a composed 11th league strike of the season.

Kearns redeemed his earlier gaffe with superb saves in the second half to deprive substitute Niall Watson, Parkes and then Cawley.