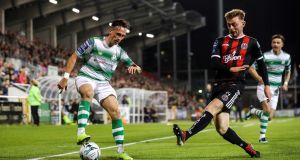 Shamrock Rovers and Bohemians could face off in the semi-finals of the FAI Cup. Photo: Ryan Byrne/Inpho

Bohemians will face Shamrock Rovers in the FAI Cup semi-finals should they beat Crumlin United on Monday.

Keith Long’s side are going in search of a first FAI Cup win in 11 years and face Crumlin at Richmond Park on Monday in their quarter-final tie which was re-arranged due to their Tunnocks Caramel Wafer Challenge Cup commitments which saw them lose out to Airdrie.

Should they see off Crumlin they will welcome Stephen Bradley’s side to Dalymount Park for their last four clash. If non-league Crumlin were to spring a surprise and beat Bohs a venue would then be decided in which to take on Rovers with Richmond Park potentially playing host again.

Rovers, who are looking to end a 32-year Cup drought, booked their place in the last four with a late winner against Galway United last week while the other semi-final sees Sligo Rovers welcome Dundalk to the Showgrounds.

The Lilywhites – who are within one win of defending their league title – beat Waterford in the quarter-finals on Monday evening while Sligo saw off UCD.

Both semis will be played on the weekend ending September 29th.

1 Spectator sues Tiger Woods and his caddie over incident in 2018
2 My favourite sporting moment: Roscommon minors restore pride to a county
3 Pro14 nations could miss out on €15m in TV revenue if league is not completed
4 Cheltenham cited Boris Johnson’s Twickenham trip as a reason for Festival green light
5 Harry McNulty: Seeing the world, from Sevens to dog-sledding
Real news has value SUBSCRIBE
Crossword Get access to over 6,000 interactive crosswords