Cream rises to the top, Ken Early on Koeman, Wexford are back and Masters week 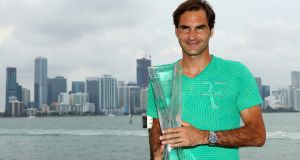 Roger Federer poses in front of the Miami Skyline after defeating Rafael Nadal in the men’s final of the Miami Open. Photo: Al Bello/Getty Images

First to rugby this morning and Gerry Thornley reflects on a stunning weekend for Leinster and Munster which saw the cream rise to the top as they both secured Champions Cup semi-final berths.

Both will be underdogs in the last four – Leinster travelling to Clermont and Munster hosting Saracens – but it’s a mark of how far Irish rugby has come in the last year that they are even there.

Reflecting on it all Joey Carbery was very calm and collected, saying that Leinster were particularly sharp in training this week. Meanwhile, Peter O’Mahony was looking to past glories with Munster as inspiration for the final surge.

On to soccer and the fallout in the Ronald Koeman/FAI/Martin O’Neill row continues with Ken Early writing that the Dutch manager should perhaps have offered a better assessment of Ross Barkley’s two-footed challenge on Dejan Lovren in Saturday’s Merseyside derby.

Koeman reflected that football was “a man’s sport” – perhaps not the best way to justify a horror challenge when his own Seamus Coleman is facing a year out with a broken leg.

In yesterday’s action Manchester City failed to take advantage in a 2-2 draw with Arsenal while Swansea and Middlesbrough could only manage a point each at the Liberty Stadium.

In GAA it was a big day in the hurling world as Wexford managed to beat Kilkenny for the first time since 2004, and the first time at Nowlan Park since 1957. Malachy Clerkin reflects on a momentous occasion.

Meanwhile, Seán Moran asseses a marathon day in which Dublin’s comeback win over Monaghan set up a final clash with Kerry after they edged past Tyrone.

On to golf and today signals the start of that oh so special week in the calendar - Masters week. Our golf correspondent Philip Reid has touched down at Augusta and writes from the fabled course of the contrasting preparations Shane Lowry and Rory McIlroy are taking this year.

1 Gerry Thornley: Ireland don’t want to box themselves into a corner
2 No further players to be called up to Ireland squad to face Georgia
3 Kevin McStay: Maybe a knockout All-Ireland Championship is the long-term solution?
4 Former France and Stade Francais winger Dominici has died aged 48
5 Thomas Galligan and Cavan raring to meet Dublin in Croke Park
Real news has value SUBSCRIBE