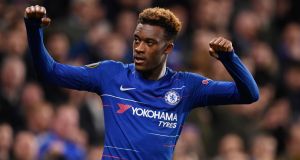 This was a mismatch from the start, one of those Europa League group games where Chelsea might have lapsed into a stroll and still prevailed with plenty to spare, but it still had its moment to savour. The clock had ticked on to the hour-mark with PAOK heaving to repel another of the hosts’ attacks when Gary Cahill and Cesc Fàbregas retrieved possession, with the latter slipping Callum Hudson-Odoi free in space down the left.

The forward scuttled forward, Leo Matos backing off further with his opponent’s every delicate touch, before stroking away an early shot effortlessly with the inside of his right foot. The goalkeeper had clearly anticipated the effort being angled towards the far post, only for the ball to fizz inside the near post as a startled Alexandos Paschalakis dived forlornly to his right. Hudson-Odoi has been at this club since the age of eight, his goals propelling dominant youth teams through the system, but this was a first senior reward. His was a broad smile as he slid on his knees into the corner, the England youth international immediately lost beneath a clutter of delighted teammates savouring his success. The evening needed that flash of the winger’s talent.

What competitive edge that might have existed in this tie had effectively been blunted before kick-off, with Vidi’s defeat to BATE Borisov in distant Belarus earlier in the day having confirmed Chelsea as winners of their group. The fact the Greek club then saw their experienced centre-half Yevhen Khacheridi dismissed within the opening seven minutes for a professional foul merely reinforced the sense this could be a lop-sided affair. Those picked by Sarri still needed to offer evidence they warrant more significant involvement in the Premier League, particularly given how infuriated he had been following Saturday’s loss at Tottenham.

Olivier Giroud, Fàbregas and Ross Barkley certainly had an opportunity to demonstrate they should start against Fulham on Sunday, and all delivered persuasive arguments for inclusion. Indeed, the Frenchman’s smartly taken goals had won the game before the interval.

Yet, inevitably, it was the homegrown fringe players, the academy graduates desperate for a proper chance, who drew the focus. Ruben Loftus-Cheek had mustered 20 minutes for his country in a friendly against USA this month, but had not represented his club since the win in Belarus three weeks ago.

He glided with menace, albeit beyond rather feeble opponents, with his close control near the touchline and rasped efforts, brilliantly finger-tipped away by at full stretch, serving notice of his qualities. Andreas Christensen, who might hope for greater top-flight involvement given David Luiz’s error-strewn display at Wembley, was comfortable enough in possession and authoritative defensively.

Then there was Hudson-Odoi. The 18-year-old was the shining light through Sarri’s rather stunted pre-season, even against Manchester City in the Community Shield, a player the head coach had decided not to loan out in the belief he would learn more around the senior squad at Cobham. In that context, 35 minutes of action in two cameos off the bench in this competition seemed like scant reward for his talent. Sarri, while recognising immense potential, had suggested on the eve of this tie that the teenager “has to improve a lot, first of all in the defensive phase, but also [HOW]to move without the ball”.

In truth, he was offered the freedom of the left flank here, particularly as the Greek side struggled to reorganise having been reduced in number. The majority inside the arena willed Hudson-Odoi to thrive. Chelsea’s support had two goals to celebrate before half-time, but it was their under-17s World Cup winner belting a shot against the crossbar from distance which drew real yelps of excitement.

Around 3,000 vociferous away fans never stopped bellowing their support but, in reality, this was all far too comfortable for the hosts. It had been a loose pass from which had undermined PAOK almost from the outset, the right-back merely serving to liberate Giroud through on goal with Khacheridi, panicked by his teammate’s skewed radar, stretching for the ball but tripping the striker. The Estonian official’s flash of red was inevitable. That served to thrust the Greeks even further into retreat, with Fàbregas duly taking hold of midfield and Chelsea, once they had found their range, easing into their advantage.

There was a crisp first-time finish from Giroud into the far corner, the striker benefiting from space created by Barkley attracting two markers with him as he darted towards the six-yard box. The Frenchman’s second was speared on the volley, Fàbregas having arced one of those glorious, trademark lofted pass over a befuddled Pontus Wernbloom for the striker to convert at the far post. The execution was immaculate for a fourth goal in his last three club appearances. Meanwhile, Alvaro Morata, watching from the sidelines, must have wondered whether he would have to wait for another outing, though the Spain striker eventually came off the bench to bury a header from Hudson-Odoi’s pinpoint cross with virtually his first involvement. That completed a rout illuminated by a youngster’s potential.