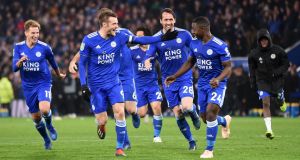 A night that delivered more than its fair share of frustration for Southampton ended in penalty shoot-out misery for Mark Hughes and his players after Nampalys Mendy converted the winning kick in the shootout to secure Leicester City a place in the quarter-finals. Danny Ward saved Manolo Gabbiadini’s kick before Mendy scored to set up a home tie against Manchester City next month. The outcome was harsh on Southampton who hit the bar through Gabbiadini and Nathan Redmond and also saw Steven Davis’s goal controversially ruled out by VAR.

This fourth-round tie had originally been scheduled for OCtober 30th but was postponed in the wake of the helicopter crash three days earlier. It was only the second game here since the tragedy and once again the owner’s name reverberated around the stadium on a night when the football felt distinctly low-key for long periods. Perhaps that was not surprising given all the changes – as many as nine for Leicester and five for Southampton.

One of the new names on the teamsheet was Obafemi and the 18-year-old Southampton forward came close to marking his first start with an early goal. Running on to Nathan Redmond’s pass the teenager showed his pace as he glided past Danny Simpson, the Leicester right-back, with relative ease. Obafemi’s final touch was a little heavy, however, and meant the angle was against him as he bore down on goal. Danny Ward, Leicester’s goalkeeper, dashed from his line and managed to block Obafemi’s effort with his left boot. That was the only shot on target in the first half, which tells a story.

Although Demarai Gray showed flashes of promise – he broke clear on the left before Obafemi’s chance but elected to shoot when a pass would probably have been the better option – Leicester never really got going before the interval. It was not until first-half injury time when they finally got in behind Southampton’s three-man central defence. Jamie Vardy, restored to the starting lineup, scampered along the byline and Jannik Vestergaard, the Southampton defender, breathed a sigh of relief as he diverted the former England striker’s cutback inches wide of his own goal. It was more by luck than judgment.

The game badly needed a goal and Kelechi Iheanacho could have provided one shortly before the hour mark. Gray’s shot took a deflection, sending the ball looping up in the air and in the direction of Iheanacho, who was unmarked at the far post. The Nigeria badly mistimed his header, however, and the ball sailed harmlessly over.

That was nothing compared to Obafemi’s miss. Redmond, twisting one way and then the other, broke into the Leicester area and thumped a left-footed shot that thudded against the bar and dropped at the feet of the Southampton striker. Only four yards out and with the goal yawning in front of him, Obafemi made poor contact with the ball and somehow contrived to hit his shot into the ground and wide. Hughes looked on in despair. It was a golden chance.

Back came Leicester. Shinji Okazaki, on for the disappointing Iheanacho, saw his curling shot saved and Gray, setting off on another sinuous run, drilled narrowly wide. Then came the major VAR talking point that led to Davis’s goal being ruled out.

The ball certainly hit Redmond’s arm before the substitute swept home but it seemed unintentional and unavoidable. Much to the disgust of the Southampton manager, the VAR came to a different conclusion. There was more frustration for Hughes to endure when Gabbiadini’s free-kick, deep into injury-time, was superbly tipped on to the bar by Ward.