Stephen Kenny: I am ‘absolutely qualified’ to take Ireland job 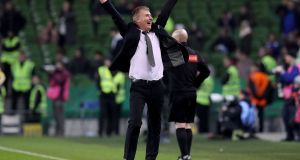 Stephen Kenny has been around football here long enough to know that not everyone is a believer in the domestic game and the 47-year-old acknowledges that there will be those who are sceptical about his credentials for the Ireland job.

But the Dundalk manager has no doubts about his own ability to succeed Martin O’Neill: “I am qualified to do it,” he says. “I am absolutely qualified.”

A week ago the Dubliner might have been wondering whether the under-21 job would be a useful stepping stone to a role he has said more than once is his ultimate ambition but, as the FAI looks for a new senior manager, he is suddenly a contender and confident about what he can bring to the position.

“Do I think that I could take charge of the next generation of Irish players and turn them into a really cohesive team; combining the best virtues of Irish sides – the honesty, work-rate and passion that we’ve shown down the years – but introducing a more European style of play, a more fluid and expansive way? Yes, I do,” he says, emphatically.

Kenny, who is one of a number of contenders in a field generally reckoned to be led at the moment by Mick McCarthy, lacks the top-level playing career or managerial experience of the English game that are traditionally expected to feature on an applicant’s CV and accepts that some might see that as a handicap, but he has plenty to point to, he feels, if and when he gets to make his case.

“Look, I can only look at the experience that I have, not concern myself with what I haven’t done,” he says.

Asked specifically if he feels he could command respect in an Irish dressingroom, he seems genuinely affronted. “I absolutely have no doubt about that. I actually find the question quite insulting.

“You have to earn respect. You earn it on the training ground every day with your level of preparation and attention to detail; no matter who you are you have to earn it every day. I’ve been with the Dundalk team for six seasons but every day I feel I have to go in and earn the respect of those players again. The minute you drop your standards, you receive nothing. Nothing.

“But I know a lot of the [international] players. I gave Stephen Ward his debut at Bohemians; gave James McClean his debut at Derry, then sold him. Obviously there are some former Dundalk former players involved and a lot of the others . . . Sean Maguire, Enda Stevens, David Meyler. a high percentage of the players have been in the league. Shane Duffy was around the scene at Derry, even though he went away at a young age so I don’t consider that an issue.

“I think it’s a non-argument. I find it difficult to understand why people would even suggest it.”

He is manifestly uncomfortable talking about the team’s most recent performances, but frank about the room for improvement that exists. He’s also quick to address one of the key criticisms levelled at Martin O’Neill, even by some of his players.

“Your brief as a coach is to go in and formulate a team from the players that are there and the ones that are emerging; to work out a style of play that suits the players in question: well a system, because there is only one style of play. Every player must know what’s expected of them in the framework of the team.

“You have to make them into a dynamic team and foster a culture within the group of players pushing each other to the absolute limits, of having an absolute dedication that’s unprecedented in the pursuit of being successful.”

He gets into a fair bit of detail about tactics, midfield formations, the ability to link play between defence, midfield and attack, how Dundalk and his other teams have played as well as how he would like an Ireland team of his to play. This, then, is his philosophy?

“Well, philosophy is an overused word but it’s the way I view the game and I think it’s the way a lot of players love to play the game. Midfield players love to be able to join in, to receive in on the half-turn, link with their front players, there must be movement off the line from wide players, full backs overlapping, connections . . . ”

The unacknowledged contrast is clear.

The question, though, is whether he can achieve the required level of success without having to become more ‘pragmatic,’ as both O’Neill and Giovanni Trapattoni insisted they were obliged to.

“Every time we went up against a top European team [with Dundalk] I could have said ‘okay right, they have better players, let’s just look to keep it tight then hope that we nick something on a set play or something’ but we always looked to do much more than that and the people who were at the matches related to that.”

So, when the going gets tough he would be wedded to ‘the beautiful game’?

“Wedded is not strong enough a word,” he says. “It’s an imperative. There is a huge desire to see really good football, to see players really showing the talent that they have, realising their potential. There is a determination to see a high level of skill and a team playing in a really progressive way.”

But it is not the only way?

“That’s a point of view. But for me, there is a right way of playing. Maybe another coach will have another view. But I don’t agree with that, I don’t agree at all. Either we succeed or we fail doing it my way but I never have compromised on that.”

There would be style, then, or the tireless pursuit of it, but O’Neill ultimately went because his employers no longer believed deep down that he could be depended upon to deliver qualification for the European Championships and the financial rewards that go with it.

Is Kenny confident that he can?

“We can all make statements. Talk is cheap. Anyone can say, ‘I can get this team to the championships’ but nobody has seen the groups yet, nobody has seen who is available.

“What I would say is that whoever manages the team in this campaign, it’s a good opportunity. Whoever is in charge has a really great opportunity.”

Others may doubt it but he believes it can be him.