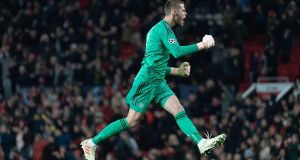 David de Gea may well stay at Manchester United for at least another 18 months after the club activated an option to extend his present contract by a year.

The goalkeeper’s current deal was due to end next summer though it is understood De Gea and his representatives are now working on the basis that the player who joined from Atlético Madrid in 2011 will stay until 2020.

Had the extension clause in his contract not been triggered, De Gea would have been free to talk to other clubs in the January transfer window and possibly sign a pre-contract agreement.

United wished to avoid a situation whereby one of their key players became unsettled or distracted by speculation surrounding a move, as happened 2015 when the goalkeeper almost joined Real Madrid.

At 28, De Gea could still have a future away from United, presumably in his native Spain, though if he stays nine years he will have spent the best part of his career in Manchester.

“David de Gea is a world class goalkeeper, probably the best in the world right now,” José Mourinho said this week, after a key save had helped set up the narrow win over Young Boys in the Champions League. “That’s exactly what you need if you want to be a big club that wins things, and that’s why we are working hard to keep him.”

De Gea has won United’s player of the year award four times in the past five seasons, which is at the same time a testament to his ability and an indication of the unconvincing performances of the players in front of him under three different managers since Alex Ferguson’s retirement.