Klopp says Salah has found his rhythm once again 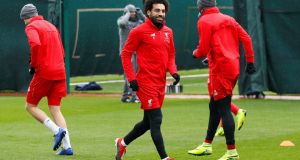 Jürgen Klopp was eulogising Kylian Mbappé, lauding the Paris Saint-Germain teenager’s potential to fill the world-class void that Lionel Messi and Cristiano Ronaldo must ultimately leave, when he concluded, “He is not the only one.”

The Liverpool manager had Mohamed Salah on his mind. The Egyptian has “clicked again”, according to Klopp. It falls on his team to follow suit on Wednesday tonight at Parc des Princes.

The challenge of delivering brilliance consistently was set to Salah from the first whistle of this campaign following last season’s haul of 44 goals. Klopp maintains the onerous responsibility has never consumed the 26-year-old but his initial form, while producing a similar return in front of goal as 12 months ago, was restricted.

Now, with six goals from his past seven games, the Liverpool forward is flowing in every respect once more. The recovery is perfectly timed for Liverpool, who will qualify for the Champions League knockout phase should they defeat PSG and Red Star Belgrade fail to beat Napoli in Naples.

“It is not about the goalscoring but his overall performance,” said Klopp on Salah’s recent contribution. “The body is back, 100 per cent, the physical things he can rely on. Of all the teams, we had the longest season with Real Madrid.

“They have struggled a little bit as well. After that they all went to the World Cup, a very long World Cup. Egypt went out earlier but Mo played a World Cup at 94 or 95 per cent fit because of the [injured] shoulder. He then had two, three weeks off. That is nothing.

“Of course not. He always tried everything. The only thing was his body needed time to adapt. Still a world-class player, still a threat in a game, but in the scoring situations not the same calmness or the same coolness. But since before the last international break it was completely obvious in each training session it had clicked again. He’s there. People need time but you, we, don’t give them time because we don’t have time.

“If you are in doubt easily then it could affect you but not for one second was he in doubt and I was not in doubt. Even Mo Salah is a human being and he needed time.”

Time is also not afforded to PSG coaches who struggle in the Champions League under the club’s Qatari ownership, and Liverpool can make it a hat-trick of misery for Thomas Tuchel.

The German coach suffered a 91st-minute defeat in the Europa League quarter-final with Borussia Dortmund at Anfield in 2016 and a 92nd-minute loss with the French champions in the opening game of a delicately poised Group C. Elimination at the group stage – which will happen with Liverpool and Napoli victories on Wednesday night – would intensify the scrutiny on Tuchel and the entire Qatari project.

“I think they are favourite for the tournament; in general they are with the quality they have,” claimed Klopp, who has Sadio Mané available after a brief illness. “I don’t think Paris feel the pressure. I know Thomas Tuchel quite well, and I’m sure he will ensure their boys ignore what the world outside thinks. They want to go through the group and that will be enough motivation for them.

"They have a really good team who have made an impressive start in the league and they have the chance to go through in the Champions League. A lot of teams struggled in moments this season. Look to Spain and what the big ones there are doing.”

Tuchel, perhaps in a message to his employers, claimed managerial stability under Klopp was behind Liverpool’s re-emergence in Europe. He also cited heavy spending at Anfield as another factor; a little rich from the head coach of PSG. “Jürgen is an unbelievable coach with unbelievable input and they have spent three and a half years together,” he said. “He has only lost one key player in Coutinho and spent an awful lot of money.”

The PSG coach also confirmed Mbappé and Neymar had recovered from injuries and “will be in the lineup”. On France’s 19-year-old World Cup winner, Klopp said: “He is really confident, knows his strengths and is using them. You cannot be 100 per cent sure you have defended him because his speed is undefendable. When you see the guys dominating the world of football like Messi and Ronaldo in the last few years, and in the years before the guys from Barcelona: Xavi and Iniesta, and Zlatan Ibrahimovic, you think is there really someone coming up who can play a similar role in more difficult football? Modern football has become more difficult for these players – and you look and think: ‘Oh yes.’ He is not the only one but he is the one everyone would now expect.”

To contain Mbappé, increase Tuchel’s torment and benefit from Salah clicking again, Liverpool require vast improvement on their Champions League performances away in Naples and Belgrade this season.

Liverpool have lost their last three European away fixtures – “actually it is the last four if you include the final,” Klopp volunteers – while PSG have lost only two of their last 49 home games in Europe: against Barcelona in 2014-15 and Real Madrid last season. Klopp insists: “It’s not about home or away. I don’t feel the difference. It’s a big chance for us – a massive game for sure. It is a tough job but we feel good.”