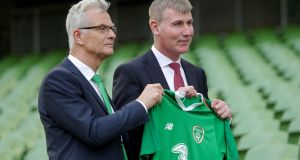 The FAI’s director of high performance, Ruud Dokter, believes that the plan for Stephen Kenny to succeed Mick McCarthy as manager of the senior team in a couple of years is essentially the culmination of an overhaul that started inside the organisation before he arrived in Ireland five years ago.

Dokter says the process of integrating the senior team’s coach into the structures constructed around the underage sides took a significant step forward over the last year as Martin O’Neill began to take a more active role. That strategy will now be pursued by McCarthy who has committed to a higher level of buy-in.

It is clearly anticipated, though, that Kenny’s move into the senior job will mean a higher level of integration than ever before . . . or at least since the departure of Brian Kerr (still exiled from the FAI) whose extraordinary success at nurturing young talent earned him promotion to the top role 15 years ago.

The former Dundalk boss will divide his time between now and August 2020 managing the U-21s, assisting Dokter with the other Ireland teams and broadening his own experience of the international game through visits to academies and other associations.

When he takes over the main management role for the 2024 World Cup campaign he will, Dokter insists, have complete freedom to do the job as he sees fit. But it is anticipated he will be firmly in tune with the work that has been done to get players into the pool from which he will then be picking. And, it is hoped, he will remain committed to putting its “philosophy” into practice.

“I have followed Dundalk over the years and the way they play,” says Dokter, who previously worked for the Dutch federation.

“I have met Stephen many times and we had discussions and there was evidence about his philosophy and style of play.

“This, he says, “is modern football. It’s not Ireland, it’s not me, it’s about how you develop young players and what we do is similar in Germany or France; to educate our young players in a modern way.”

The FAI, which has resisted many calls to reinvolve Kerr in the coaching process, has spent years overhauling and expanding its youth structures. It has been widely criticised, though, for the disconnect between a system that places great emphasis on cultivating a positive, passing game amongst its younger players and a senior team where that has clearly not been the priority.

Both Giovanni Trapattoni and O’Neill talked a lot about their desire for the team to play better football but the Italian simply suggested that there was little or no point trying because it was beyond the players while his successor claimed he was at a loss as to why more of what he was demanding wasn’t delivered.

Kenny acknowledged the other day that the Association didn’t seem to feel he had the experience to take over the senior team straight away and there are many who feel the decision to promise him the job in two years is simply another populist move by John Delaney who wanted to keep everyone happy.

However the manager seems to have embraced the idea of learning what he can before his time arrives with McCarthy facing the more immediate task of fashioning a side that can qualify for the European Championships.

The more obviously solution from the FAI’s perspective might have been to hire a continental coach now, one already committed to the required thinking.

But Dokter sees merit in the new arrangements.

“I have great belief in the managers we have as well. We brought Mick in because we’re of the opinion that Mick is the best candidate to deliver what we want but [beyond that] it is obvious that Stephen is a candidate that you want to work with.”

The solution, he acknowledges, is “unusual,” adding that, “this is a unique project. You can’t say we’ll do this every time but it fits at this time”.

A debate ensues as to what precedents there are and there is a polite disagreement between Dokter and one of the reporters he is taking questions from over whether it had been pre-ordained that Danny Blind would succeed Guus Hiddink as the coach of the Dutch national team in 2015.

What goes unmentioned is that Blind’s two-year stint in the job was a disaster despite the former defender having played more than 40 games for Holland and previously been first team coach back at Ajax.

There are, then, no guarantees.

Much will depend on Kenny’s ability to command the respect of the players he inherits, something he insists he has no doubts about whatsoever despite the fact that he is far from your average hard-nosed ‘gaffer’.

Players can sometimes simply be unreasonable and it has previously been an issue for him, albeit before his hugely successful spell at Dundalk.

At the club on Tuesday Pat McEleney expressed the firm belief that Kenny would be fine. He already has a connection to several of the players including James McClean who the Dundalk midfielder, a close friend of the West Brom star, suggested “loves” Kenny and would use his status as a “big voice” in the dressing room to smooth the new manager’s arrival to the role.

Assuming then that the players embrace Kenny, his progressive ideas and positive style of play, there is only the minor matter of whether they really are good enough to qualify for tournaments, or least remain competitive, while playing that brighter brand of football.

Dokter believes they are.

“You’ve a small window [to get the players on the training ground during international weeks, a recurring theme with Trapattoni and O’Neill] so that’s why a pathway is needed, to work on the same ideas. Because you don’t have the time [to change things from scratch as the senior manager].

A lot is riding on him being right, and not just for Kenny. If the pair of them can deliver, though, the significance for the future of Irish football may go far beyond the League of Ireland’s best manager getting an opportunity many felt he had earned.