Stephen Kenny determined to make the most of his opportunity 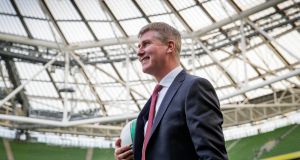 It seems an unlikely night to remember as the one that fuelled your ambition to manage Ireland, but if there was a moment that crystallised Stephen Kenny’s desire to do the job, it was, he says, the night Martin O’Neill’s side lost 5-1 to Denmark in last year’s World Cup playoff.

The then Dundalk manager always tried to get to the international team’s home games and met up with two of his four children before that one, a hugely anticipated event in the wake of the scoreless game in Copenhagen a few days earlier.

“I remember being all around South Lotts, Ringsend, walking that way, through Ballsbridge, having some food around the area, and getting the incredible sense of anticipation,” he recalls.

“The atmosphere for that game was better than I’d experienced since they’d changed the stadium. Obviously the result didn’t go well but the atmosphere that day was just incredible. And that still hasn’t left me. I knew then that that’s what I wanted and that I would want that for the future.”

By then it might just about have seemed attainable, although he admits that making an impact in European club competitions was the more immediate priority.

“It’s not like I had a strategy to get to manage Ireland, not at all,” he insists. “What I wanted to do was get a team to qualify for the group stages of a European competition. That was a big ambition, to try and compete at that level. The rest has followed obviously. I do look at the big picture all the time, I don’t just go step by step, but it wasn’t that with the Ireland job, it wasn’t something I was firmly focused on.”

Now that he has it, though, he determined to make the most of the opportunity. He remains unsure, he admits, of some of the finer points of what might be described as his day-to-day duties, but improving the fortunes of the Under-21 side, and the players in it, will be a major preoccupation between now and August 2020, when he is due to replace Mick McCarthy in the senior job.

There will also be time, he suggests, however, to look around and learn what he can from clubs and federations whose operations are a world away from what he has experienced in the environment of the League of Ireland.

“I was only appointed on Saturday so we still have to work that out, but I have a huge work ethic and this is a great challenge,” he says. “I don’t envisage it being a problem and I look forward to getting stuck into what has to be done.

“My main focus is managing the under-21 team and getting the best team I can in that period. We have never been in contention to qualify, really, ever. We’ve been well down the seedings but the draw is on the 12th of December and we will see who that brings.

“One of the things I will push is that whether the games are in Tallaght or Sligo or Cork, I will be looking to get full houses, I will be strongly pushing that everyone in Irish football comes along. The players need that, they need to feel they are coming into something that is really relevant and important.”

Of course you have to be able to adapt. But ‘adapt’ does not mean that you surrender possession

As for the research aspect, he says: “I suggested it, but John [Delaney, FAI chief] and Ruud [Dokter, performance director] thought it was a brilliant idea. International football is different in terms of its preparation levels, with those blocks of games, two quickfire matches all the time. Detail is huge, how you prepare teams, and I want to see what other countries do, to compare to my own ideas, see how can I improve myself.”

Learning as much as he can from McCarthy, he also insists, will be a key priority.

The intention, he says, is to be the best manager he can be when he takes charge in two years’ time, when his priority will be to get Ireland playing a far better brand of football than the supporters have grown used to.

“Of course you have to be able to adapt,” he says, when asked whether the importance he attaches to having his team play in the “right way” might end up making him inflexible. “There’s no question about that. But ‘adapt’ does not mean that you surrender possession and just hope that you can hold out and nick something on a set play.”

He certainly aspired to that and his determination to play that way seems to have been a key reason the association hired him. It is also, he suggests, a central part of the reason he believes he will not be having any problems working with the players he inherits.

“If you play in a progressive, attacking way, the vast majority buy into what you are doing. Players want to play that way. I don’t think they will have any qualms about the way the team will be set up or the level of detail or the quality of the training sessions.”

Asked if he is concerned by the pressure from the public or the press that he might have to endure in such a high profile role, he smiles.

“I might have to go back up and live in Inishowen and walk them empty beaches for a while,” he says. “I understand the question you’re asking. I suppose I have a lot to learn in that regard, but you have to try and live your life as best you can. I understand it won’t be the same.”

If he delivers half of what he hopes to, he can say that again.