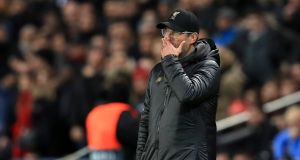 Liverpool manager Jurgen Klopp on the touchline during his side’s 2-1 defeat to PSG at the Parc des Princes, Paris. Photograph: Mike Egerton/PA Wire

At the end of Liverpool’s defeat in Paris on Wednesday night Jürgen Klopp and Thomas Tuchel offered up a weirdly self-referential round of press conferences deep in the bowels of the damp concrete hulk that is the Parc des Princes.

Heavy metal passive-aggressive post-modern press conferences. Pull up a chair, media studies students. And all this just to drive some straightforward headlines about a 2-1 loss that owed a lot to Paris Saint-Germain’s craft and intensity, but which also flagged up the snags in Liverpool’s midfield that will be a concern for this evolving team.

No doubt Klopp will continue to ponder this in those hours when he is not sat in front of a piece of cardboard covered in adverts. But there is an issue here, and a point of confusion between method and personnel on nights such as these.

Liverpool began with the same flat, muscular Milner-Henderson-Wijnaldum axis that has now started all three away defeats in Europe. It is a midfield that looks perfect for last season’s system, the high-pressing hard-running game that creates chances out of orderly disorder.

Faced with a midfield of greater ball-playing craft they instead sat deeper and went toe-to-toe in the finer arts, looking at times like a man trying to conduct a concert orchestra with a policeman’s baton. Sometimes you really are better off just hitting someone over the head with it.

“Un Victoire Capitale! PSG s’impose sur Liverpool” was the headline in one Paris daily on Thursday morning. And for all the distracting noises about gamesmanship, PSG did impose themselves in that period when the game was won, Verrati, Neymar, Marquinhos and Ángel Di María dominating the ball, and playing in a system that flattered their own best attributes.

Successful teams are sometimes compared to a fine wine, something that becomes more nuanced with age. This Klopp-era Liverpool have gone further, changing from a bottle of something fizzy and fun and likely to leave you with an exhilarating headache the next day into a thicker, more restrained vintage, lacking a little in the high notes.

This is, of course, part of the plan. Klopp has spoken at length about his efforts to create a team that can win by scoring just once rather than playing always in the eye of the hurricane. It may work out. The season is long and attritional.

But there is also the danger that a midfield of workers and runners makes sense when your full-backs and front three are tearing around creating potent havoc; but less so when there is a requirement to make chances in a more patient, structured fashion. There is also no doubt that they have missed Alex Oxlade-Chamberlain’s dynamism, his more vertical movements with the ball. Philippe Coutinho’s skill and vision in those areas hasn’t been replaced. Naby Keïta will presumably settle. Fabinho seems an unnecessary layer of additional muscle.

At the end of which £90 million has been spent on re-gearing the midfield for this more measured Klopp team, but it still looks more suited to scrapping and covering behind the old tearaway attack. And yes, quite a lot of this comes back to Jordan Henderson, who played as he always does in Paris: wholeheartedly, retaining his intensity to the last, but fraught with the same limitations.

Henderson is a strange player in many ways. He has played 260 games now, been a fixture in the two best Liverpool teams of the last 13 years and been picked and prized by Klopp, Brendan Rodgers, Kenny Dalglish, Gareth Southgate, Roy Hodgson and Fabio Capello. For all that, he remains a player whose qualities are more obvious to those who watch the team from the inside than to those who see just the outline details of match day.

Clearly those managers will also see Henderson’s technical limitations. This is a midfielder with one goal in his last 97 games, despite spending a fair amount of each game around the opposition goal. He seems physically unable to turn with the ball in a tight space, meaning every time he takes it with his back to goal he passes backwards, a powerful contrast with most high-class central midfielders, for whom it is an essential skill to take the ball and turn in one movement.

In Paris Henderson was bypassed repeatedly in the first half by Neymar, the last with a dismissive veering run that just said, yes, I can move that bit quicker than you.

To Henderson’s credit he kept going right to the end, dragging his team along with him, influence growing as time ticked down. But it is not hard to see why Klopp would rather turn the discussion to PSG’s players falling over a lot (which they did) than linger on an unbalanced midfield that seems caught between stick or twist, dogs of the high-press asked to perform a more mannered role against opponents better tailored to the task.

Liverpool could still have emerged with a draw. Sadio Mané dropped deep to good effect and bridged the midfield creativity gap at times. Andrew Robertson was fearless as ever. And in mitigation of the midfield effort, Roberto Firmino’s poor form hardly helps. That ability to drop back, hook the ball out of the air, capoeira-style, and find players around him on the turn is a powerful creative weapon. Right now he just looks a little low on zip.

There are some positives in defeat. In a way the result simplifies the final act against Napoli two weeks from now. Liverpool will have to win 1–0, or handsomely. This is surely the moment for a tactical reboot of last season’s blitz football, a game to play with fire not ice in the head; and in a style that might just leave the midfield looking a little happier in its own clothes.