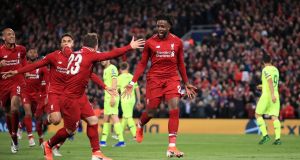 Trent Alexander-Arnold: Played an important part in this memorable win. He did well for the second and the speed of thought for the fourth was superb. Rating: 8

Virgil van Dijk: The PFA Player of the Year repelled ball after ball into the box and was confident enough to step or launch passes that would make other defenders dizzy. Rating: 8

Joel Matip: Strong in the air and on the ground, the centre back has stepped up a level alongside Van Dijk. Rating: 8

Andy Robertson: Showed he was up for the fight when pushing Lionel Messi in the head inside the opening minutes. Not afraid to shoot and in the right place at the right time defensively, his evening came to a premature end after being hurt by Luis Suarez. Rating: 7

James Milner: An intelligent, experienced presence in midfield asked to fill in at left-back after Robertson’s half-time withdrawal. Did that job as well as you would expect. Rating: 8

Fabinho: Booked for a heavy challenge on Suarez just 11 minutes in, he walked the tightrope with aplomb during a superb performance. Rating: 8

Jordan Henderson: Brilliant play brought the opener and a hurt knee looked to end his match but he battled on and led by example. Rating:8

Sadio Mane: Smart to read play and win ball in build up to the first goal, his movement was brilliant and unsettling. Rating: 8

Xherdan Shaqiri: First start since January and proved a handful, buzzing around and sending in a fine cross for the third. Rating: 7

Divock Origi: Without Mohamed Salah and Roberto Firmino through injury, he netted a brace on a night that will long in the memory. An unlikely star. Rating: 9

Joe Gomez (for Origi, 85 mins): Brought onto settle things as wave upon wave of Barcelona attacks rained down. Rating: 7