Uefa officials in Dublin to meet FAI and Sport Ireland

The visit comes as governance issues continue to plague the association 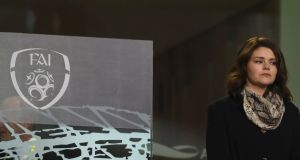 Representatives of Uefa are in Dublin for discussions regarding the ongoing crisis at the FAI, the association has confirmed. Representatives of the European federation are scheduled to meet with senior FAI officials in the early part of Tuesday before sitting down with Sport Ireland later in the afternoon.

The visit comes after a succession of damaging revelations that laid bare huge governance issues at the FAI and resulted in a number of inquiries being launched into the association’s finances and governance as well as prompting John Delaney to step aside pending a review of his part in events out at Abbotstown.

The Uefa officials are due to hold talks with members of the recently established Governance Review Group and are expected to outline how they feel some of the issues facing the FAI might be addressed in the course of any restructure.

Uefa is by some distance the biggest single external funder of the FAI with its centralised broadcast deal for senior international deal forming the basis of support that comfortably exceeds €10 million per annum, far more than is directly provided by the government here.

Delaney is, of course, a member of the organisation’s Executive Committee – essentially its board – but his absence from any obvious role in the European Under-17 Championships despite his position as chair of the Uefa’s Youth and Amateur Football Committee suggests he is regarded as having been been badly undermined in Nyon as well as in Dublin.

“Our UEFA colleagues are here to offer their support and insight to the Governance Review Group as we work together to improve Irish football,” said Rea Walshe, who has replaced him as FAI chief executive on an interim basis.

“Their visit is welcome. The experience and expertise within UEFA will offer real benefit to the Group as we work towards an initial report in June. They are here to help and the support from UEFA is welcomed by the FAI.”

Sport Ireland CEO John Treacy said described the visit as: “a significant show of support to the work being carried out by the (governance) Group,” and said he was looking forward to “a productive meeting”.

Over the weekend it was announced that the Governance Review Group has invited submissions regarding its work and any potential reforms related to it from “stakeholders in the game including sponsors, the Professional Footballers’ Association of Ireland, FAI staff and the general public”. These can be sent by email to governance@fai.ie .