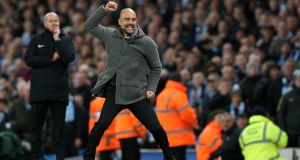 After Manchester City placed one hand on the Premier League trophy Pep Guardiola hit back at Liverpool, claiming that City’s title rivals play “without pressure”.

City leapfrogged Liverpool once again in this exhausting championship race, thanks to Vincent Kompany’s 70th-minute thunderbolt which beat Leicester City 1-0, to leave Guardiola’s players with their destiny in their own hands.

The victory took City to 95 points, one ahead of Jürgen Klopp’s team, before Sunday’s final-day trip to Brighton & Hove Albion, and Guardiola suggested the pressure has been weighing heavy on the shoulders of his champions.

“Liverpool play without pressure because they know it is not in their hands. It is easy,” he said. “We have the pressure.”

The 1-0 win was City’s third in their last four games, having also beaten Tottenham and Burnley by the same scoreline, and Guardiola praised the control exerted on the game.

“Burnley – we didn’t concede one corner, one shot on target, we controlled the game. We were much better than the opponents,” he said. “Sometimes you need a goal like Vinnie today.”

Of his winner Kompany said: “I could hear people saying: ‘Don’t shoot, don’t shoot!’ I’ve not come this far in my career to have young players tell me when to shoot.”

Guardiola has previously stated the 33-year-old would be offered a fresh one-year deal when his current one expires in the close season.

Guardiola was also asked about the significance of Kompany being on the pitch at the end with his children and whether it signalled the last home game of an 11-year City career.

“We spoke with him and his agent,” the Catalan said. “At the end of the season we are going to talk to him clearly. He is an incredible human being and he has helped me a lot. Always I was sad I could not use him too much but we have always known we could count on him for his personality. This club is what it is because of people like Vincent. After the FA Cup final we will decide the best for both parties.

“We spoke with him three weeks ago, one month ago. We spoke fluently two or three times. We are going to take a beer together and decide what is best – especially for him and for the club.”

Of his future Kompany, who was in tears at the end of the match, said: “I do not know at this point. Absolutely not [retiring]– I am going to play. Nothing is written in stone.”

Brendan Rodgers expressed much pride in his side. “We have been trying to get the team to play like a big team – with dominance, intensity,” the Leicester manager said. “I was really pleased with that aspect, how we gave them problems. The areas we’ll look at will include the opening period. That is what invited Vincent to get the shot in.” – Guardian