Origi and Shaqiri come in as Liverpool chase down Barcelona 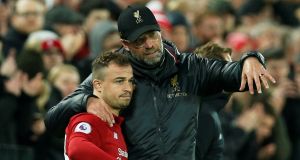 Xherdan Shaqiri has been handed a starting spot by Liverpool manager Jürgen Klopp for the second leg against Barcelona. Photograph: Andrew Yates/Reuters

Divock Origi and Xherdan Shaqiri were given the difficult job of replacing Mohamed Salah and Roberto Firmino as Liverpool sought to pull off an even tougher task at home to Barcelona in their Champions League semi-final second leg.

The pair were two of four changes made from Saturday’s win at Newcastle, with James Milner and Joel Matip coming in for Georginio Wijnaldum and Dejan Lovren with Salah (concussion) and Sturridge the others to miss out, as the Reds sought to overturn a 3-0 deficit.

Teenager Rhian Brewster was named in a matchday squad for only the second time in his Liverpool career as he looked to make his debut, with fellow 19-year-old Ben Woodburn also among the substitutes.

Former Liverpool stars Luis Suarez and Philippe Coutinho were named in Barcelona’s side.

1 Cheltenham faces criticism after racegoers suffer Covid-19 symptoms
2 Ian O’Riordan: Learning to run for the first time all over again
3 Skilled craftsmen providing the essential equipment as great rivals get set to rumble
4 How Silvio de Sousa fell victim to the seedy underbelly of US college basketball
Real news has value SUBSCRIBE