Kompany man for all seasons, but will he stay for another at Man City?

Guardiola: ‘We are going to take a beer together and decide what is best - for him and for the club’ 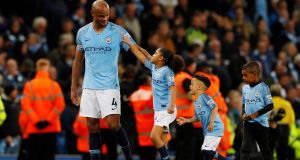 Manchester City’s Vincent Kompany with his children after the victory over Leicester City at the Etihad Stadium. Photograph: Phil Noble/Reuters

What a way, potentially, to go – via the sweetest of match-winning, 30-yard goals. With almost 70 minutes played and Manchester City’s title defence in peril, up stepped Vincent Kompany to fire a rocket past Leicester City’s Kasper Schmeichel in the penultimate game of their season-long tussle with Liverpool.

If it proves the final significant act of Kompany’s stellar 11 years at the club, this will be a fitting, storybook ending. After a victory that means City can retain the title by beating Brighton on Sunday the 33-year-old denied he would retire. But Kompany did leave his future open by saying “nothing is written in stone”, a sense reinforced by Guardiola. “We are going to take a beer together and decide what is best – for him and for the club,” the manager said.

What is clear is the belief that drives Kompany. Of the Roy of the Rovers finish he says: “I woke up and said: ‘I’m going to do something today’. I woke up like that as well for the last five games and it never happened. But I think it’s a recipe for success: wake up and think: ‘I’m going to do something’. Sometimes these things are just meant to happen – I can’t explain. I wanted it, I believed in it, and it happened.”

His first goal of the season was the title race’s cometh-the-hour, cometh-the-man moment, delivered in breathtaking manner. Just when City required someone to meet the twin challenge of breaking the deadlock and (maybe) breaking Liverpool’s heart their veteran captain answered the call.

Kompany has previous for being the headline act. Rewind seven years, to the derby of the 2011-12 season at the Etihad on April 30th. Then, Alex Ferguson’s Manchester United arrived as leaders, three points ahead of City, with three matches left. When David Silva delivered a corner on the stroke of half-time Kompany lost Chris Smalling to power home a header that claimed the match and City went on to win a first crown since 1968 on the final day, via Sergio Agüero’s dying-seconds finish against Queens Park Rangers.

The personal triumph for Kompany is made all the sweeter because of his terrible luck with injury. Monday was his 338th appearance for City. But the tally would be closer to 500 without the litany of problems he has suffered.

This has made Kompany’s late-season resurgence all the more admirable. He has become Guardiola’s go-to partner for Aymeric Laporte in central defence, named in the XI for the past three outings: the 2-0 win at Manchester United and 1-0 victories over Burnley and Leicester. It would be a major surprise if he were not retained for the trip to Brighton and, fitness permitting, the FA Cup final against Watford the following Saturday.

City have won the Carabao Cup – Kompany was a half-time substitute – so have a chance of a historic domestic treble. Kompany says: “Two massive games – we go to Wembley, play Watford, we play Brighton; I’m happy with playing two finals. It’s very simple –you win two games, you win two trophies, you lose both games you lose two trophies.”

Moments after scoring Monday night’s goal Kompany fell when receiving an Ilkay Gündogan pass. But unlike Steven Gerrard, whose slip against Chelsea in April 2014 allowed Demba Ba to score in a win that precipitated the collapse of Liverpool’s title challenge, he recovered.

Kompany was cool under pressure. “I felt I had time still,” he says. “I wasn’t as nervous as people think, but I did think: ‘Typical, you’re the hero of the game and then you slip and the other ones score a goal’. But I thought no, not today.”

At the close Kompany’s children came on to the pitch to share one of the standout moments of a standout career. “I don’t think they know I scored,” he says. “I was speaking to them and it was like: ‘Pffft’. It didn’t seem to affect them too much.”

It did, though, have a seismic effect on the title. This is what big-game players do: intervene when required. Kompany has won three Premier League titles, the FA Cup, and four League Cups. Completing the domestic treble would be a Hollywood finish if Kompany’s time at City is about to end. But do not be too surprised if he is back next season leading by example, inspiring his team-mates and, sometimes, even scoring brilliant, unexpected and vital goals. – Guardian