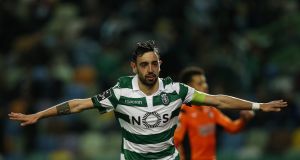 Manchester City are set to beat Manchester United to the signature of the Sporting Lisbon midfielder Bruno Fernandes. Pep Guardiola has been monitoring the Portugal international for a considerable time and City have now lodged a €55 million bid with the team currently third in the Portuguese league.

United inquired about the possibility of signing the 24-year-old last month but City have jumped ahead of their rivals in the queue and expect to conclude the deal in the next few weeks. Fernandes, an attacking midfielder who prefers to play centrally, has 19 goals and 13 assists in 31 league games this season.

City’s sporting director, Txiki Begiristain, has been in discussions with his Sporting counterpart, Hugo Viana, and they have edged towards an agreement in the past few weeks. Fernandes has a buyout clause of €100 million (£86 million) but City are confident they can secure a deal for considerably less with the help of one or two players going in the opposite direction.

Fernandes has 11 caps for Portugal, winning the first one of those in August 2017. He has had an unusual career path as he joined Novara in Italy from Boavista at the age of 17, without having played a first-team game in Portugal, and represented Udinese and Sampdoria before signing for Sporting for €8.5 million in 2017.

Meanwhile, Edu has agreed in principle to become Arsenal’s technical director this summer. The former Arsenal midfielder is currently working for the Brazilian FA but is ready to join the Premier League club after the Copa América, which ends on July 7th.

Arsenal have been looking for a technical director for some time and targeted Edu after their number one choice, Monchi, returned to Sevilla after leaving Roma in March.

Edu, who played for Arsenal between 2001 and 2005 and won two league titles with the club – including the 2003-04 Invincibles season – and two FA Cups, is the coordinator for the Brazil national team and did not want to leave his role before the Copa América, which is held in Brazil this year.

He will have one more meeting with Arsenal to finalise the details of the contract and is then set to sign the agreement.

The Arsenal director of football, Raul Sanllehi, and the managing director, Vinai Venkatesham, are keen to continue the restructuring of the team around the manager, Unai Emery, after the head of recruitment, Sven Mislintat, left in February after less than 14 months at the club.

That departure came only five months after Ivan Gazidis, who had been Arsenal chief executive for nearly 10 years, also left to join Milan.

Arsenal are fifth in the Premier league and it looks as if they will need to win the Europa League to qualify for next season’s Champions League. They are three points behind Tottenham in fourth with a significantly inferior goal difference before the last game of the season.

They are, however, 3-1 up against Valencia in the Europa League semi-finals after the first leg and would play Chelsea or Eintracht Frankfurt in the final should they win the tie on Thursday.