Pochettino may quit Spurs if they win Champions League 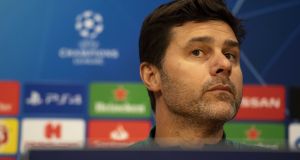 Mauricio Pochettino made the stunning claim on the eve of Tottenham’s Champions League semi-final, second leg at Ajax that he would consider walking away from the club if they went on to win Europe’s elite competition.

Spurs trail 1-0 and Pochettino accepted it would be a miracle if they got through and then triumphed in the final on June 1st. The manager’s body language was surprisingly flat at his pre-match press conference; his answers unusually non-committal.

But he dropped his bombshell towards the end of it when he was asked how he would feel if he could end what he has described as a five-year chapter at the club by winning the Champions League. “It should be fantastic, no?” Pochettino replied. “Close the five-year chapter and go home.”

Pochettino was asked to clarify his comment. Was he joking? “It’s not a joke. Why?” he said. “To win the Champions League in this circumstance, in this season – maybe I need to think a little bit to do something different in the future. Because to repeat this miracle, you know . . . But for sure, I go home. Whatever happens tomorrow, I go home.”

The manager appeared to intend that his last comment ought to be taken as a joke. Clearly, he will go home from Amsterdam after the second leg. But the rest of the episode led to plenty of head scratching. What a thing to say on the eve of arguably his biggest game as a manager.

Perhaps, were the dream scenario to play out on the pitch, Pochettino might consider that there would be nothing left to achieve at Spurs, the pinnacle having been scaled. Where would his motivation be in that event?

More immediately, Pochettino said he wanted his players to perform with greater freedom than they had in the first leg, when they could not find their usual intensity in the opening 30 minutes. It was during that period that Donny van de Beek scored Ajax’s goal. A positive start feels imperative for Spurs to reach their first final in this competition.

“It’ll be difficult but it’s still open,” Pochettino said. “It’s an exciting moment for us to be in a semi-final. We need to enjoy and have more freedom to play and to start the game the way we want to start. The approach was really poor from our side [in the first leg]. We need to feel more freedom to play; we have nothing to lose from the beginning. We know we need to win.”

Tottenham have all but ensured a fourth consecutive top-four Premier League finish after results on Sunday went in their favour – which will bring with it another Champions League qualification.

“At the start of the season, no one believed we had the chance to reach the Champions League final and be in the top four,” Pochettino said. “Both things can be real. But this is not the right moment to talk [about the league position].

“I will wait until the last moment to give my players the team talk. I will not prepare anything. I talk from my heart and I can’t tell what I am going to feel in that moment.”

Pochettino has lost Davinson Sánchez to a thigh strain, meaning he will most likely revert to a back four, in which Jan Vertonghen could wear a mask to protect the facial injury suffered in the first leg. Érik Lamela is in contention after recovering from a hamstring problem while Son Heung-min is available after suspension. Harry Kane has travelled to support his team-mates but remains out with ankle ligament damage.

Son was sent off in Saturday’s defeat at Bournemouth and Pochettino knows he can ill-afford any further lapses in discipline. “Son was the first to feel disappointed and it cannot happen again at this professional level,” he said. “He must stay relaxed in his mind.” – Guardian