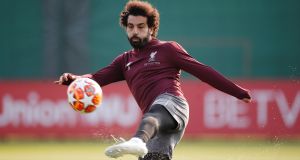 This time last year Liverpool had vanquished Porto 5-0 in the Champions League last 16 and were on the eve of completing a 5-1 aggregate victory over Manchester City in the quarter-finals. Heady days? Not for Jürgen Klopp. Not when the Premier League was a source of occasional regret and unremitting tension. This season, with no margin for error in the title race and the possibility of another Champions League final, is the one the Liverpool manager is truly in love with.

Klopp’s team delivered more than the latest shot across City’s bows with victory at Southampton on Friday. The 3-1 recovery also guaranteed Champions League football at Anfield for a third year in a row next season. And with five Premier League games to go. Where others see drama and anxiety in challenging Pep Guardiola’s champions for the title, Klopp sees a release and freedom in which his players can excel over the coming weeks. He would take a repeat of last season’s scoreline against Porto, but not the pressure that accompanied the journey to Kyiv.

“Oh yes, 100 per cent,” the Liverpool manager replied when asked whether he found this run-in more enjoyable than the one 12 months ago. “The big difference for me is I want to be as successful as possible, but I am a normal employee as well, so I know the most important thing is that we need money for next year. That means we have to qualify for the Champions League. That is real pressure.

“If you are not for sure in the Champions League it changes everything – you can talk about this and that with the owners, but you pretty much don’t have to ask them because we don’t spend money we don’t have. Yes, this is completely different. I love this season much more.”

Liverpool had played out a goalless draw against Everton before their quarter-final victory in the second leg at the Etihad last April and drew with West Brom and Stoke, two teams who would ultimately be relegated, in the weeks that followed. Their current haul of 82 points from 33 games is, their manager believes, further evidence of a development that will reach a new level should the Premier League or Champions League trophy reside at Anfield by the season’s end. “We all know what happens if the boys do win something – that changes everything,” Klopp added. “But in this moment we should not think about that. As a club, as a group, with all our supporters we should enjoy the situation because it is so different.

“Last year we had proper pressure in the last part of the season. Chelsea was winning each game and we were drawing, after being 10 points ahead, and in the end we had to win the last game again to qualify for the Champions League. We had pressure. Different pressure. Champions League was like: ‘Oh my God, you are there!’ We don’t expect for sure or take it for granted that we will be in the Champions League final again but having the chance again is really unbelievable.

“On the other side we have made this big step in the league. We are responsible for the league not being decided yet. In all other seasons we would have probably 60-something points as well and be fighting with five other teams for three places behind City. This year we could keep it more open for us in another position. It is all good but now we want to carry on.”

Virgil van Dijk echoes his manager’s sentiment that Liverpool should cherish the prizes within their grasp and not fear them slipping away. “Enjoy it,” was the classy defender’s take on this defining stage. “Do what we have been doing all season and enjoy every bit of it as well. I think all of the teams in the league would love to be in our position right now, and that is how we have to look at it. We are in a great situation. It could have been better but it is how it is. We still have a chance to win the title and a chance to win the Champions League.

“It can become a fear when you read all the media and social media. In this situation you need to be very strong mentally and remember what is important is what we have at Melwood, what we have within each other, the manager, the staff and what we work on each day.”

Liverpool are without influential left-back Andy Robertson for the first leg through suspension, with James Milner expected to deputise. Klopp claims the margin of victory in Porto last year was not an accurate reflection of the problems Sérgio Conceição’s team caused Liverpool, and there is no advantage to be gained from recent history.

“The result last year is more valuable for Porto than for us,” said the Liverpool manager. “But I know my players now well enough and they are completely focused on the job to do. Everybody wanted Porto [in the draw] until you have Porto.”

That is open to debate. That nobody wanted Liverpool, who have reached the final of every European competition they have played under Klopp, goes without saying. “That’s true,” the manager agreed. “When I was a young manager I was always dreaming of having a team of world-class players with the attitude of a proper challenger. That is actually what I love, and we showed that especially in the Champions League very often.

“We love the competition. We want to go there and it’s now clear that we are qualified again for the Champions League next year. That was a real moment. Cool. It didn’t happen too often, especially not to the boys, and now having these games with this special attitude the team can create, in this special stadium with a crowd that create an atmosphere, it is a place you want to be part of.

“The best way is as a supporter watching the game, but you wouldn’t want to be the opponent. This is one of the toughest places to go at the moment and I hope we can show that again tomorrow night.”