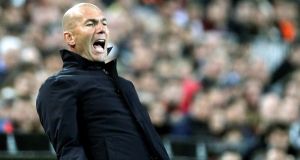 Zinedine Zidane placed no blame on his players for his first defeat since his return as Real Madrid head coach after Valencia claimed a 2-1 win at the Mestalla.

The Frenchman had overseen two wins since stepping back into the Real hotseat following the sacking of former team-mate Santiago Solari last month but Valencia were his first acid test.

Los Che had been unbeaten in LaLiga since January 5th and they extended that run thanks to goals from Goncalo Guedes and former Real defender Ezequiel Garay, with Karim Benzema’s header in injury-time scant consolation.

Zidane said in quotes on Real’s official website: “We started the game strongly with good possession, pressing high up. We just needed to get that first goal.

“I can’t blame the players for anything, they really tried hard. We played against a top team. It’s a defeat and defeat always hurts.

“We struggled to create chances, get shots off and come up with anything in the final third. We needed a little bit more near the opposition goal.

“The team fought to the end. It’s a tough spell, a defeat, but we have to accept it and think about the eight games we have left. We have to focus on doing a better job on Saturday.”

Valencia trio Kevin Gameiro, Geoffrey Kondogbia and Rodrigo all missed the target when well-placed while Real struggled in the final third.

Zidane, though, feels his side competed on equal footing with their opponents after watching them slide to their ninth league defeat of the season.

He added: “I always say results are fair and I accept them but it was an even game. They got two goals against us almost out of nowhere. We have to accept that Valencia won the game.

“This is a tough run for us, the whole season has been hard going.

“Now I need to take control of my team and get us playing better next time out. The players are ready to fight until the last and we want to end on a high in preparation for next season. We are going to leave no stone unturned.”