Dundalk had €2.2m of Europa League money held by FAI for 11 months 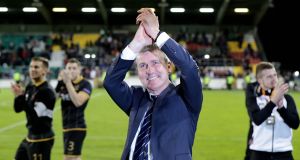 Social Democrat TD Catherine Murphy says she will raise the issue of serious delays in the payment by the FAI of Uefa prize money to League of Ireland clubs with John Treacy of Sport Ireland at Wednesday’s session of the Oireacthas Committee for Transport, Tourism and Sport.

Confirmation that Dundalk waited almost a year to get €2.2 million of the €7 million or so it was owed in Uefa prize money for its involvement in the 2016-17 Europa League group stages, provides a stark illustration of the way the finances of League of Ireland clubs have been viewed as being of secondary importance by an association that has clearly been battling to get by itself for some years now.

Rumours, and in some cases actual complaints, regarding the late payment of funds intended for clubs but initially paid out by Uefa to the FAI, are fairly routine. They are not confined to prize money. The €800,000 paid annually by the European federation to support the youth development work undertaken by Irish clubs usually arrives in Abbotstown in the autumn but is not passed on until the Spring. This year, there was a delay in making the payments to individual clubs of almost six months, a period that includes the build up to the new season, a potentially difficult period for clubs when little revenue is being generated.

In the case of Dundalk - who appear to have only received the final portion of their money when a takeover was imminent and the books needed to be up to date - both parties claim, somewhat remarkably, that the entire arrangement was voluntary.

The club received only €3 million of their money in 2016 itself but would certainly have expected to have been up to date by the end of the winter season, May of the following year, after having been put out of the Europa in early December.

Instead, payments dragged on through much of the following year with the club apparently requesting sums of money from the FAI which had already received the funds from Uefa, generally in the region of €250,000, at different points in time and then getting amounts they had asked for although usually, it seems, in instalments.

“It’s significant it was 2017,” says Murphy, a member of the Oireachtas Committee that Sport Ireland chief executive Treacy is due to appear before on Wednesday, “and it underscores concerns about how precarious the finances were in the FAI. The FAI should only have been a conduit for that prize money, it only should have flowed in and out of the organisation.”

The detail, though, will come as no surprise to other clubs who have participated in European competition in recent years. After their Europa League run in 2011, Shamrock Rovers were left waiting on around €500,000 for more than six months and are believed to have experienced significant difficulty in obtaining payment.

The total earned by the Dublin club at that stage was around €1.5 million, a fraction of the prize money amassed by Dundalk for much the same achievement five years later, but getting the money was probably all the more important to them given that Rovers had had to meet substantial expenses out of the portion of the cash they had received.

This is a particular issue for the various other clubs that compete in the qualifying stages each summer. Prize money has grown hugely over the last decade and having won the league, and so initially qualified for the preliminary rounds of the Champions League last summer then having gone into the Europa League, Cork City would have been due around €800,000 - but charter flights and other expenses have to be met up front.

One club claims that while Irish League sides receive money up front from the association north of the border to help with participation, funds that are then deducted when the prize money comes through, League of Ireland outfits have to come up with the cash, often through borrowings, and are then made to wait extended periods to get it back.

Some now seem to use the European Club Association in order to pinpoint when Uefa have handed the money over to the FAI in order to start chasing it promptly. As with what was reported to be a €100,000 loan from its own chief executive, though, the association’s ongoing cash flow issues seem to require it to act in unorthodox fashion.

Unlike John Delaney, the clubs involved - with the exception of Dundalk through the early part of 2017 - are not in a position themselves to be making six figure loans to the Irish game’s governing body.

Murphy says she will raise the issue with Treacy on Wednesday. “Sport Ireland don’t deal with the professional side, but they will have responsibility to have a concern for the overall health of the finances of the FAI, and in that context, I will ask them about the delay in paying the prize money to Dundalk.

“We (the committee) might have influence, but Sports Ireland have power, and it’s the power of sanction. It’s there for a very good reason. You don’t pull it out at every hand’s turn, but it has to be used to ensure the health of the governing bodies. This is not some minority sport, this is he sport that is most played in the country.”