Is Northern Ireland a football team or an expression of identity?

What does the Northern Ireland team mean to Protestant community? 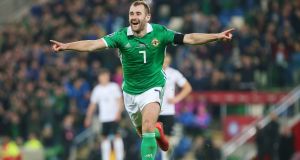 Monday afternoon, downtown Belfast: Rinty Monaghan was looking impressive, all 10ft of him, cast in bronze beside St. Anne’s cathedral. They placed the famous flyweight here four years ago, with Carl Frampton turning up to say: “Boxing is now full of alphabet titles and no one really knows who the world champion is. When Rinty was the world champion, there only was one, and everyone knew him.”

It is a great statue. When “Irish Eyes Are Smiling” is inscribed on the base, Rinty being known as the singing boxer and it being his signature song. At his funeral in 1984, there is a clip of the priest saying: “He brought good news.”

Belfast is not often called a good news city and part of the statue’s appeal lies in it not being a traditional landmark. Alas, the latter haven’t gone away, you know. Across York Street and along to Belfast Central Library. Upstairs in their archive diligent librarians have unearthed a gem – a small, blood-red book with no decoration on its cover bar the words: “Irish Football Annual 1880”.

It is unlikely many copies were printed and, almost 140 years on, survivors must be rare indeed. It was published by the Dublin Steam Printing Company of Middle Abbey Street and cost one shilling and 6d.

The contents are primarily rugby but the second section of the book is about association football – soccer. It refers to the “scientific beauty of the dribbling game” and records the formation of Cliftonville in the autumn of 1879 as “the first Association Club in Ireland” which in its inaugural season had “succeeded even beyond their most sanguine expectations”.

It is a small treasure, some more good news coming in the wake of Northern Ireland’s 2-1 Euro 2020 victory over Belarus the previous night. It took Michael O’Neill’s over-achieving squad top of their group. Four days earlier Northern Ireland had won 2-0 against Estonia. Two wins, six points and a coherent structure. That could ring a bell.

It was Niall McGinn who scored the first against a stubborn Estonia and he celebrated on the pitch with relief as well as joy. But afterwards, on McGinn’s name, the news began to pivot.

The 31 year-old from Tyrone spoke of the three teenagers killed on St Patrick’s Day close to where McGinn grew up. “It is so, so sad what happened,” he said, “my sister was down at the house the other day and my mum has been along as well. I saw the remains coming home and it has been a desperate time for all the families involved.

“It was an important goal for Northern Ireland, but it was for my local community as well.”

McGinn’s sincerity was audible. This was not a footballer pressed into PR.

It is eight years since a bullet in the post addressed to McGinn was intercepted. He was a Celtic player then. That was 13 years after the Good Friday Agreement. It is approaching its 21st birthday and sometimes you wonder how McGinn and others truly feel about “my local community”. How did he feel about it in 2011 and how does he feel when “No Surrender” is shouted during God Save The Queen before Northern Ireland play.

Because the cry was heard again before both of last week’s matches. Then how did McGinn feel when he saw the video of Northern Ireland “fans” singing “We hate Catholics”, which came to light on Monday? The sequence was filmed in a bar on Belfast’s Sandy Row on Sunday. How did McGinn feel when a Co Tyrone NI supporters club apologised for the content, calling it “despicable”?

As he returned to his club, Aberdeen, McGinn may have felt a swirl of reflection and questions. Belfast can do that. Yet these really aren’t questions for Niall McGinn, these are questions for the Protestant community.

What does the Northern Ireland team mean to it? Is it a football team or an expression of identity? Is it a combination? If so, where do Catholics fit in? Are they part of the team but not part of the identity? Is that identity solely British, as in the singing of GSTQ, or partly Irish, as in the name of the Association and the team? And should we be asking this in 2019?

The reality is we need to. It should be said there is not a “Protestant community”, as in a bloc. The impression may be otherwise, that those singing anti-Catholic songs are representative of the whole. In fact, inside Windsor Park fans sing a range of football songs – about Brazil, George Best and Steven Davis among others.

Politically, culturally, there are shades of Ulster Protestantism certainly not represented by, for instance, the DUP. A destructive and lingering aspect of the modern Troubles, however, is a tradition such as trade unionism, based in Belfast manufacturing, has dwindled along with the industrial base. Other strands of Protestantism have been hectored into a corner down the years by Paisleyites and by the surrounding violence.

Some have reacted to the sectarian video by pointing to Northern Ireland fans’ happy-clappy behaviour at Euro 2016 in France, but that is not a complete representation either. It would be irresponsible to claim the DUP and Sammy Wilson are not in touch with their constituency. Ditto Sinn Fein.

Northern Ireland’s players warmed up to Alternative Ulster on Sunday at Windsor and if sectarianism is to be challenged, it has to be engaged and alternatives offered.

In Inventing The Myth, Connal Parr’s book on the “Ulster Protestant Imagination”, he quotes the north Belfast playwright Gary Mitchell discussing the flag protests of 2013: “It’s the easiest thing in the world to go: ‘Look at these eejits. They want their flag put up, haha, look at them, they’re scum!’ That’s not helping anybody.”

Mitchell worries about education. In the latest A-Level results, the top seven schools are Catholic schools; there is concern about working class Protestant boys in particular, their motivation, status, future. Mitchell worries about cultural exclusion. He has not bought into the top-down peace process and there are days back in non-tourist Belfast when you can understand his doubt.

As far back as 2000, Mitchell spoke of “a fundamental crisis in Protestant culture. We have been going through an extremely depressing loss of identity, loss of culture and worst of all, loss of a future.”

In a vacuum the one-note strident version of Protestantism has echoed. It can still be heard, it’s an Old Firm weekend. No Surrender.

But there are other Protestant boys, other voices. Carl Frampton salutes Rinty Monaghan and campaigns for Integrated Education. By chance Van Morrison was at the Northern Ireland team hotel last week. They play Days Like This after the final whistle at Windsor Park. So there are other anthems, other tunes.

And you read of pioneering Cliftonville’s sanguine expectations way back, remember Niall McGinn’s heart, see Rinty’s statue. He brought good news. Irish eyes can smile in Belfast too. You cling on.

Fennelly eager for the chance to prove himself again 01:08
Ed Byrne, Johnny Sexton and Rob Henshaw to miss clash with Georgia 01:00
Simon Easterby admits Ireland may need to take new line on maul 01:00
O’Neill braced for meeting with his native county 01:00
Lancaster says Ireland need to finish series on a high 00:30

1 Ed Byrne, Johnny Sexton and Rob Henshaw to miss clash with Georgia
2 Gerry Thornley: Ireland don’t want to box themselves into a corner
3 Kevin McStay: Maybe a knockout All-Ireland Championship is the long-term solution?
4 Simon Easterby admits Ireland may need to take new line on maul
5 Here is your handy guide to sport on television this week
Real news has value SUBSCRIBE
Crossword Get access to over 6,000 interactive crosswords