FAI executive vice-president: ‘It really was impossible for one person to do the three jobs’ 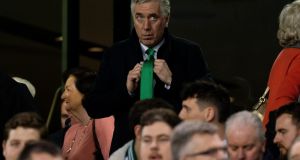 John Delaney ahead of the Euro 2020 qualifier between the Republic of Ireland and Georgia at the Aviva stadium. Photograph: Tom Honan

Under increasing pressure over the latest controversy involving a €100,000 bridging loan in 2017, the 51-year-old ended his 14-year spell as chief executive 10 days ago.

Delaney is still due to appear before the Oireachtas committee on Sport, Transport and Tourism next Wednesday to field queries on the bridging loan and other corporate governance concerns.

This Wednesday, Sport Ireland will face the same committee, with the state agency revealing they remain in the dark over the circumstances surrounding the loan which Delaney repaid within eight weeks.

He has resisted calls from football and political figures to quit the FAI entirely, adamant there’s a list of projects awaiting him.

It was, he explains, the demands of double- or treble-jobbing caused by his election to Uefa executive committee which necessitated the sideways move.

Delaney is no longer a director of the association and can only attend board meetings in a non-voting capacity.

“It really was impossible for one person to do the three jobs,” he told the Tipp FM podcast.

“I’ve been trying to attend functions and games every weekend and run an organisation with a €50 million turnover and 200 staff.

“Then there’s a huge international dimension to the job. I’m on the board of the Uefa.

“We have a feasibility study along with England, Scotland, Wales and Northern Ireland for a World Cup bid.

“That’s why the FAI commissioned an independent report to split the duties.

“There’s the generation of revenue in other parts of the world like the United States and Australia which we’ve never really looked at.

“I’m giving a flavour of what’s ahead for me. I know there’s a lot we can deliver internationally over the next few years in terms of funding and hosting major tournaments.”