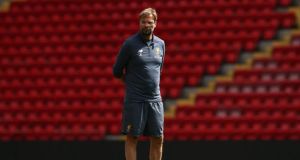 Liverpool manager looks on during a training session at Anfield on Monday ahead of the Champions League final on Saturday. Photograph: Jan Kruger/Getty Images

Jürgen Klopp believes Liverpool’s bravery, work-rate and desire for a sixth European Cup can compensate for Real Madrid’s greater experience when the sides meet in the Champions League final. Saturday’s contest in Kiev will be Real’s fourth Champions League final in five years, with Zinedine Zidane’s holders aiming to lift the trophy for a third consecutive season. No club has won a hat-trick of European Cups since Bayern Munich in 1974, 75 and 76.

Liverpool’s recent European record pales by comparison but having reached a first final in 11 years with several exhilarating performances and scored a competition record 40 goals en route, their manager is confident his team’s virtues can prove decisive in Ukraine.

Klopp refused to be drawn on whether Real should be favourites but said: “They are more experienced, that is a fact. If there is a market for experience they should sell it because then they would be even richer. Experience is very important in life but it is not the only thing. It is important to be more experienced but you can level it with desire, attitude, work-rate and that is what I love in football. We made our own experience.

“We are not as long together as Real Madrid because they play these finals pretty much with the same team so as a group they are very strong. That is all fact, but it is still football and we have a chance and let’s give it a try. Let’s go there and try to perform on a level which maybe people would say is not possible for us but it is possible.”

The Liverpool manager expects his team to play without fear against Real having thrived on the pressure of reaching the final and next season’s Champions League on the last day of the Premier League season with an injury-hit squad. He also cited brave attacking displays against Manchester City and Roma in the quarter-finals and semi-finals respectively as reason to approach Kiev with optimism.

Klopp added: “We had a lot of pressure and a lot of expectations in the last few weeks. Each game we drew we wanted to win. I said all that rubbish after West Bromwich Albion only because I was really angry we didn’t win. I am not a psychologist but if somebody would tell me constantly that everything is different in the next game then I would get nervous.

“We have to handle it like an opportunity because it is an opportunity. You cannot go into a football game knowing you can lose it. I experienced that plenty of times but I am still a happy person. Life goes on. We will show the players why it makes so much sense to be brave. It was not easy to be brave against Manchester City and against Roma but we did it. The moment we tried to defend the result we were almost out. I am in a good mood. I am really looking forward to the game. Unlike the Brighton one, I would buy a 1-0. This game I really want to play.”

Long-term absentees Alex Oxlade-Chamberlain and Joël Matip were the only senior players missing from training on Monday as Liverpool stepped up preparations for Kiev while Emre Can, along with Adam Lallana, significantly increases Klopp’s midfield options for the final.

“The mood is very good for the club, for us and for the boys because we finished the season in the best way,” said the manager.

“We felt really good and then having time to prepare for the game is really good. We could do a lot of things and didn’t have to compress it into two or three sessions.

“We could do a lot of things in training. We have three more sessions and then we will be best prepared for the game. We feel good and think we deserve to be where we are because the boys showed up in the campaign.

“It was very exciting and now we want to bring it to the best possible end.”