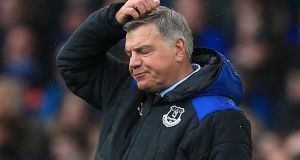 Sam Allardyce is set to leave Everton this week with the former Watford and Hull City manager Marco Silva a leading candidate to replace him.

Allardyce is scheduled to meet Everton’s major shareholder, Farhad Moshiri, in the coming days and his departure is expected to be announced by the end of the week. Allardyce is six months into the 18-month contract he secured in November and oversaw an eighth-place finish in the Premier League. But fierce opposition to his management style among the club’s supporters, allied to the hierarchy’s desire for a fresh start following a dreadful season, is likely to result in the 63-year-old leaving with a final year’s pay-off of around £6m.

Everton’s board will hold meetings over several key issues this week. It is also expected to hold talks with Wayne Rooney’s representative, Paul Stretford, with the former England captain seeking clarification on his Goodison future before deciding whether to accept an offer to join DC United in the MLS.

Silva is the front-runner to succeed Allardyce having been Moshiri’s preferred appointment when he sacked Ronald Koeman on October 23rd. Hopes of a swift transition may be complicated, however, by a legal dispute between the Portuguese coach and Watford.

Watford sacked Silva in January following a run of one win in 11 matches. The club claimed in a statement that an “unwarranted approach by a Premier League rival” – Everton – led to a significant deterioration in Silva’s focus and results. The manager believed he was sacked prematurely and that he is owed six months’ salary, £750,000, and remains in legal dispute with his former employer over his settlement terms. – Guardian service