Virgin unclear as to how they will broadcast Champions League 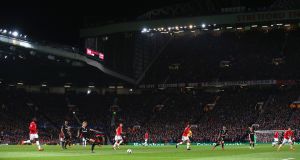 The way in which Champions League and Europa League football is broadcast in Ireland could be set for a big change after Virgin Media and TV3 announced that they have secured the rights to over 300 games for the next three seasons, but did not reveal how they would broadcast them.

Previously, Champions League matches had been shared between RTÉ and TV3 on terrestrial television in Ireland and, while that is still the case, the carve-up has changed somewhat.

With kick-off times set to be split between 5.55pm and 8pm on Tuesdays and Wednesdays from next season, Virgin – which acquired TV3 for €80 million in 2015 – has secured rights to show a double-header on Wednesdays as well as one game on Tuesdays, while RTÉ will get first choice on the single game it shows on a Tuesday.

Virgin will also exclusively show both the Champions League and Europa League finals in Ireland, although it is yet to say whether the matches will be broadcast on TV3, if they will all be free-to-air or if some will be shown via a streaming service.

When asked by The Irish Times if all of the matches in question would be broadcast free-to-air, a TV3 spokesperson said: “We will be sharing more information about the deal over the coming weeks.”

When asked if the Champions League final would definitely be broadcast free-to-air on TV3, the spokesperson responded that more details will be revealed in the near future.

On satellite TV BT Sport continues to hold exclusive rights, although there is speculation that it may sub-let some games to Channel 4 or ITV as there are currently no European games on terrestrial television in the UK.

The move by Virgin is the latest in its ever-expanding live sport portfolio which now includes the majority of the Champions League and Europa League, the Rugby World Cup, the Six Nations, the Champions Cup and UK racing.

If Virgin does opt to stream some matches exclusively online it will represent a further move towards such a system in football, with Facebook and Amazon both already having made tentative – but so far unsuccessful – moves towards the Premier League market.

“Our award-winning sports broadcasting team look forward to bringing the biggest clubs and the best players to our viewers and customers in new and exciting ways over the coming European football seasons.”

In other news, BT Sport will make the Champions League final between Liverpool and Real Madrid available to watch for free online. Non-subscribers will be able to view the match in Kiev on May 26th via YouTube, the BT Sport app and the company’s website. The final, as with all Champions League and Europa League games, will not be broadcast on any free-to-air television in the UK.

1 Welcome to Iten in Kenya – home of champions and cheats
2 How do Klopp’s Liverpool measure up against greats of past?
3 Saracens to accept second 35-point deduction and effective relegation
4 TJ Reid reveals the fresh secrets of his consistency
5 James Ryan returns to the Leinster fold for Benetton clash
Real news has value SUBSCRIBE