Celtic will come to Dublin to take on Shamrock Rovers

Scottish champions will play pre-season friendly in Tallaght in July 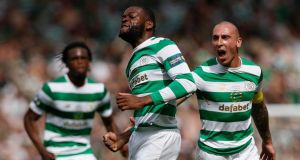 Shamrock Rovers have announced that Celtic, fresh from the historic success they completed by winning the Scottish Cup final over the weekend, will be coming to Tallaght on July 7th for a preseason friendly.

Tickets for the game, which will take place a matter of days before Brendan Rodgers side kicks off its campaign to qualify for the group stages of next season’s Champions League, go on general sale on Wednesday at 1pm with members and season ticket holders at the Dublin club set to get the opportunity to buy prior to that.

Prices are €30 for adults and €17.50 for children although they have to be under 14 years of age to qualify for the discount, it seems. A limited number of premium packages costing €45 are also available with details available at the Shamrock Rovers website.

Celtic, meanwhile, will discover on June 19th who they will face in their opening round of Champions League qualifying and with the Scots seeded and Cork City not, there is the chance that they will be taking on the Airtricity League champions.

The dates for the first round games are July 11th/12th then the 17th/18th with the second round to follow in the following two weeks. The draw for the opening rounds proper of the Europa League, in which Rovers, Dundalk and Derry City will all be involved, will also take place on June 19th with the initial games scheduled for July 12th and 19th.

Of the three Irish clubs, Dundalk will be only one to be seeded.

1 European clubs must take lessons from financial demise of former greats
2 Munster braced for worst of financial crisis due to Thomond Park debt
3 Record numbers of adults in Ireland participating in sport and walking
4 When the action stops, sports photographers think outside the box
5 From history to food: Players take chance to focus on life after rugby
Real news has value SUBSCRIBE