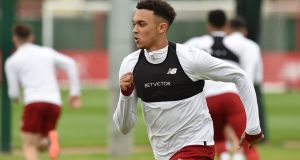 Uncapped Trent Alexander-Arnold has been included in the England squad for the upcoming World Cup. Photo: Andrew Powell/Liverpool FC via Getty Images

The uncapped Liverpool youngster Trent Alexander-Arnold has been named in Gareth Southgate’s England squad for the summer’s World Cup, which was confirmed on Wednesday afternoon.

There are also places for Gary Cahill, Fabian Delph and Ruben Loftus-Cheek alongside highly-expected faces such as Harry Kane, Raheem Sterling and Jordan Henderson. There is no place, however, for Adam Lallana, who has been placed on standby after a season heavily disrupted by injuries. As widely reported, Joe Hart and Jack Wilshere miss out completely.

“I believe this is a squad which we can be excited about,” said Southgate. “It is a young group, but with some really important senior players so I feel the balance of the squad is good, both in terms of its experience, its character and also the positional balance.

“We have a lot of energy and athleticism in the team, but players that are equally comfortable in possession of the ball and I think people can see the style of play we’ve been looking to develop.”

Alexander-Arnold, who has made three appearances for the Under-21s, had been invited to train with the senior squad ahead of the friendlies against the Netherlands and Italy in March and has enjoyed an impressive season with the Champions League finalists. The 19-year-old played a key role in the eye-catching knockout victories over Manchester City and Roma, with Southgate having taken note.

The right-sided defender, who can also operate in midfield, has made the most of his opportunities this term with both Nathaniel Clyne and Joe Gomez having suffered injuries, and would offer competition at wing-back. Kieran Trippier’s fitness has been under scrutiny of late after he twisted his knee in Tottenham Hotspur’s recent victory over Newcastle, which forced him out of the final day win against Leicester, while Kyle Walker was utilised at centre-half in those games in March.

“The first call up for Trent Alexander-Arnold is well deserved,” added Southgate. “When we pick young players, it’s not just because they are young, it’s because their performances deserve it.

“We’ve also had a couple of injuries with Alex Oxlade-Chamberlain and Joe Gomez, which is a huge blow for them personally and disappointing for us.”

Cahill, omitted for the games against the Dutch and Azzurri, has regained his place at club level of late and is back in the fold with the national set-up having been selected in the travelling party. With 58 caps, the 32-year-old will be the most experienced member of the squad.

Burnley’s Nick Pope has also been included and it is his selection which to all intents and purposes has led to Hart missing out. Speaking about the omission of the Manchester City goalkeeper, who has spent the past season on loan at West Ham, Southgate said: “With Joe, we’ve got three other goalkeepers who have had very good seasons and the decision I was faced with was do I keep Joe in and have experience around the group? Or give the three guys who have basically had a better season a chance? We felt the players all needed to be in on merit after their performances this season.”