Arsenal’s clash with Vorskla switches to Kiev over security concerns 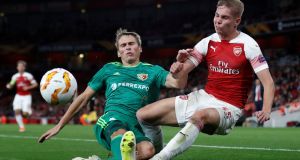 Arsenal’s Europa League clash with Vorskla on Thursday will take place in Kiev due to security concerns.

The Group E fixture had been scheduled to be held in Stadion Vorskla im. Olexiy Butovskiy in Poltava, around 185km east of the Ukrainian capital. However, after martial law was declared in some regions of the country, Uefa’s emergency panel announced the match would now take place in Kiev’s Olimpiyskiy Stadium.

A statement from European football’s governing body read: “Uefa’s emergency panel has today taken the decision to relocate FC Vorskla’s Uefa Europa League group stage match against Arsenal FC from the city of Poltava, following the introduction of martial law into certain regions in Ukraine. The match will now take place at the Olimpiyskiy Stadium in Kyiv on Thursday, November 29th, at 18;55CET.

“Uefa will continue to monitor and assess the security situation in Ukraine in the coming days before making any decision on potentially relocating other matches.”

Kiev’s Olimpiyskiy Stadium hosted the 2018 Champions League final in May, as well as the Euro 2012 final.

Ukraine’s president has called for martial law to be imposed in the country due to escalating tensions with Russia, whose coastguards are accused of seizing three Ukrainian ships in Crimea on Sunday.

Up to 500 Arsenal fans were expected to travel to the game in Poltava, and now must make alternative arrangements.

The British foreign office said on its website: “Ukraine is imposing martial law in parts of the country from November 28th to December 27th; increased security presence is likely in these areas; you should remain vigilant and follow the advice of local authorities.”

The office has established a special Arsenal section on its website to keep supporters up to date with potential developments. It stresses that while the trip should be trouble-free, fans should “be aware of the current political situation”.

Arsenal are already through to the Europa League’s last 32, and will win the group with victory over a side they beat 4-2 in London in September.