Premier League leaders will qualify with victory away to Lyon 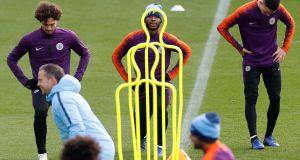 Pep Guardiola believes Manchester City’s critics will claim his side has fallen short of greatness if they fail to win the Champions League.

Should City defeat Lyon at the Olympic Park on Tuesday night they will qualify for the knockout phase as Group F winners but while this would also be a third away victory in the group phase - the first time Guardiola has achieved that feat - he is conscious that unless City claim the ultimate prize his team will not be considered one of the greats by the club’s naysayers.

“For the people who don’t love us too much, who use money as an argument, then we have failed if we don’t win the Champions League,” he said. “For the other people, especially our fans, the people who say: ‘okay, we enjoy watching our games, we are happy with what the guys are doing,’ I am pretty sure they don’t have regrets about what these guys are doing for the last 12, 14, 15 months every three days.

“That is the best compliment, the best success a team can have. But we want to qualify [for the last 16], continue that level in the Premier League, being solid away and at home, and arrive in the best condition possible [at that stage] with everyone fit and [ready to] compete.

“Then - OK, try it again, why not? And if we go to the quarter-finals and maybe you are lucky to go forward. After that, the competition it speaks for itself. A lot of desires, a lot of wishes we can have at the end. The competition is so tough, so clinical, to say if you are better you are going to win, if you don’t, you are going home.”

Guardiola was referring to the muscle injuries to Bernardo Silva and Ilkay Gündogan, which means they join Kevin De Bruyne as frontline midfielders who are unavailable. While Gabriel Jesus also has a foot problem, the absence of Silva and Gündogan means Guardiola will have to decide whether to give Phil Foden a second Champions League start of his fledgling career.

Guardiola has no doubt the 18-year-old is ready for the challenge. “I had the feeling in pre-season - I was incredibly impressed then,” he said. “He’s stronger, more conscious that he’s able to play with us.

“In the last game [the 4-0 win at West Ham] he played 20 minutes at a high level, and without the ball he’s so intense.

“Every time he has played he’s played good, pre-season, 90 minutes, always good. When you ask I always say he’s part of the squad and he’s definitely ready.”

“They were better than us,” Guardiola said. “We lost the first game against

a tough team and we have the chance to qualify. We come to do our jobs.

“In the last month we played a high level, scoring a lot of goals. Never in nine or 10 years have I been able to win three [group] games away so it will be an exceptional situation.”

A draw will ensure progression and it would also take Lyon through if Hoffenheim v Shakhtar Donestk also finishes level. “I want to qualify that’s the first target,” Guardiola said. “If you make one or two mistakes you can be out. This competition is so dangerous. We have not qualified and in this competition it’s not done until it’s done.

“The first thing is to qualify and then to finish first in the group and we travel here to do that. You lose the first game at home and the group stage becomes so tough. We did our job winning the next three.”

1 Cheltenham faces criticism after racegoers suffer Covid-19 symptoms
2 Andrew Conway diary: In search of a competitive edge
3 Avoid the treadmill at all costs – marathon training in the 2km radius
4 BBC to draw from well of nostalgia during barren months
5 Sonia O’Sullivan: Taming The Tan gave us one last roll of the dice before shutdown
Real news has value SUBSCRIBE