Mauricio Pochettino unhappy over balance of Spurs squad in Europe 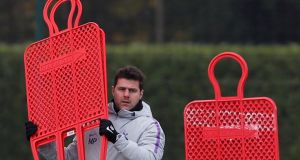 Mauricio Pochettino has voiced his unhappiness at how Tottenham’s recruitment policy has affected his selection decisions, before Wednesday night’s make-or-break Champions League tie against Internazionale at Wembley.

The manager said the club had made unacceptable mistakes regarding the balance of the squad for the season which, he suggested, were exacerbated by the inability to sign any new English players.

Clubs can name 17 non-locally trained players in their senior squads for Uefa competitions and Spurs have run into difficulties because they have 20 of them. It meant Pochettino had to omit Juan Foyth, Georges-Kévin Nkoudou and Vincent Janssen for the group stage of the Champions League.

Ben Davies and Eric Dier are classified as non-locally trained as they spent their academy years at clubs outside the remit of the Football Association. Foyth does not count as an under-21 player, as he does in the Premier League, because he did not spend enough of his formative career at Spurs.

Foyth’s emergence in central defence, as injuries have affected Jan Vertonghen and Davinson Sánchez, has thrown the issue into focus. Pochettino said Vertonghen had been fit to return from a two-month hamstring injury lay-off against Chelsea on Saturday but he opted to start with Foyth because he knew the latter would be unavailable against Inter.

Vertonghen will now return but Pochettino spoke about his irritation at Foyth’s unavailability and how the issue, in general, was affecting his rotations. He also made it plain he would not accept all the blame for it.

“It’s in the club’s hands – not in my hands only,” Pochettino said. “We share the responsibility. If not, it looks like the bad things are the gaffer and the good things we share all together.

“I am so disappointed from the beginning. Not only with Foyth – also Nkoudou and Janssen. That’s so painful. It’s a mistake that we made which, at that level of football, we cannot repeat again. We need to find solutions before the start of the season.”

Spurs have only five locally trained players in their senior squad; Uefa reserve a minimum of eight places for this category of player.

“I told you we needed English players [in the summer transfer window] but it was impossible and now that’s the problem and it’s so painful to have a player [Foyth] out of the list,” Pochettino said. “We hope that in March we can do a new list [for the knockout rounds] and include him.

“When you need to take a decision from the beginning, you cannot guess what’s going to happen. Central defence was a position where we had players, but we have Davinson injured and Jan was injured. That is why we use Juan. I am happy with Juan and his evolution but I am so disappointed we cannot come with him in the Champions League.”

Pochettino will change more than Foyth for Vertonghen from the team that started in the 3-1 Wembley win over Chelsea as he contends with a gruelling schedule; next up for Spurs is the derby at Arsenal on Sunday. The manager reported Danny Rose would return to the squad, having recovered from a groin injury, but Victor Wanyama is out again with more knee trouble. The club await the results of scans with a degree of anxiety.

The team’s confidence was pepped by the performance against Chelsea, easily their best of the season, and what pleased Pochettino most was the players’ attitude afterwards. In August he had been angry to hear some of them talk up their title chances after the 3-0 win at Manchester United. After the Chelsea game there was no triumphalism, only focus. Spurs have to beat Inter and then, in all likelihood, win at Barcelona to ensure qualification to the last 16.

“The most important thing is to keep humble,” Pochettino said. “I was so disappointed after Old Trafford. There were a lot of players talking about winning titles but it was only the beginning and only three points. I think we’ve learned. The most important is to talk on the pitch and the attitude we show.

“Talk outside of the pitch? Of course but always being humble. If not, you start to think in a different way. You believe you are so good and then you don’t need to make the effort. With talent only – and if you are not in the right attitude – you can win some games but trophies? Impossible.”

Pochettino was asked whether his team facing a Mission Impossible to qualify was a motivating factor. ”Yes, a massive motivation. When people say that something is going to be difficult, for me, it’s like, ah, I’m so excited to show them it’s completely different.”

Champions League final likely to be moved from Istanbul