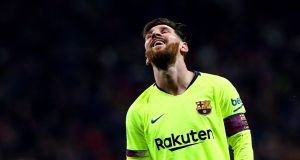 Barcelona have become the first sports team in history with average first-team pay in excess of £10 million (€11.3m) a year, according to the latest Global Sports Salary Survey, which also shows the extent to which wages are spiralling across all sports.

This season the Spanish champions will pay its 23-man squad an average of £10.45m (€11.8), before bonuses, a figure that has risen by a third since 2017-18. Much of that is down to signing Lionel Messi to a new deal that pays him in excess of £50m (€56m) a year, although signing Phillippe Coutinho, Arthur, Malcom and Arturo Vidal, and handing Gerard Piqué, Sergi Roberto, Samuel Umtiti and Sergio Busquets lucrative extensions has also significantly swollen the payroll.

Manchester United (£6.53m/€7.3m) are the highest British club in the survey in 10th, one spot behind Juventus who have leapt from 32nd place to ninth after signing Cristiano Ronaldo. Manchester City (£5.93m/€6.7m) are the next highest Premier League club in 20th position, with Chelsea, Arsenal and Liverpool all in the top 40.

The survey highlights, for the first time, the extent of the “Premier League premium” that clubs pay to attract and keep players – with research from the football analytics firm 21st Club showing that English sides not only pay more in transfer fees than their counterparts in Spain, Italy, Germany and France on average, but often two to three times more in average salaries for players of the same quality too.

The survey quotes 21st Club’s head of football intelligence, Omar Chaudhuri, who says that senior figures at Premier League clubs often tell him they feel “ripped off” in the transfer market – while clubs on the continent sense an opportunity when doing business with English teams.

“One Scandinavian team we met last year were looking to sell one of their brightest young stars to raise some income,” says Chaudhuri. “Our objective valuation of the player – based on similar players in the market – assessed him to be worth €6m to €8m. ‘But if we sold him to an English club,’ said the club’s sporting director, ‘we could maybe get double that.’ If anything, he had underestimated this premium.”

English clubs usually overpay in wages too. As Chaudhuri points out, West Ham play at a similar level to Girona in La Liga – and if the two were to play at a neutral venue it’s likely that it would be a tight match. Yet West Ham’s average first-team pay is £3.2m (€3.6m) a year, while Girona’s is £700,000 (€790,000). In other words, according to Chaudhuri, “The English team is effectively paying over four times as much for the same level of performance.”

The figures, which are sourced directly or indirectly from unions, player associations, players, agents, leagues or club sources, also shows that cricketers in the Indian Premier League earn more per match than players in any other sport. According to the survey, IPL players earned an average £274,624 (€310,000) despite only playing 14 games – far ahead of the second place NFL (£138,354/€156,191) and the Premier League (£78,703/€88,849).

Incredibly, IPL stars also make more on average from playing between early April and late May than Tottenham’s players do across an entire season of English football.

League-by-league sections in the report highlight trends such as MLS teams not valuing defenders – literally – with not a single defender in the top 30 best-paid players in the league. The parlous state of the Chinese Super League’s finances is also explored, showing top teams there are losing huge sums as they pay wages akin to big-five European levels.

The NBA remains comfortably the top-paying league in world sport, with average basic salaries of £5.9m (€6.66m) this season, while the WNBA is the best paid women’s league. However average salaries for WNBA players are £59,295 (€66,937) a year – one-hundredth of that of their male counterparts.

1 Sideline Cut: Vignette shows why Bird is the true shark in The Last Dance
2 Argentina rugby great Hugo Porta continues to give back to his beloved game
3 World Rugby study advises removal of reset scrums to reduce Covid-19 risk
4 Coming fourth in the Olympics didn’t change this fearless quartet, time did
5 Premier League return moves closer with clubs to vote on contact training
Real news has value SUBSCRIBE
Crossword Get access to over 6,000 interactive crosswords