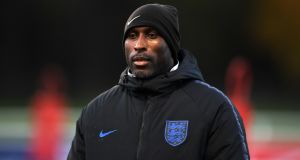 Sol Campbell has taken his first job in management with League Two’s bottom side Macclesfield.

The former England, Tottenham and Arsenal defender has signed an 18-month deal with the Silkmen, who have been looking for a new boss since the departure of Mark Yates last month and sit seven points adrift of safety.

Campbell was pictured at the club’s Moss Rose ground on Tuesday morning, and a couple of hours later Town tweeted a picture of a bottle of Sol with the caption “drink anyone?” before confirming the news.

The 44-year-old has made no secret of his desire to become a manager and has spoken out on a number of occasions about the barriers for aspiring Black, Asian and Minority Ethnic (BAME) coaches.

Campbell, who retired from playing in 2012 after a career that brought him two Premier League titles, three FA Cups and 73 England caps, had a spell as assistant manager of the Trinidad and Tobago national team and recently spent 10 days working alongside England Under-21s manager Aidy Boothroyd.

Campbell was invited to help out at St George’s Park as the Football Association bids to address the issue of under-representation of BAME coaches in the game.

“It’s hard to call it a scheme, because it’s more a door-opening or an opportunity,” Campbell told the FA’s official website.

“You shouldn’t label it a scheme because football should be the winner, so talent or opportunity is what it’s bringing to England and they are addressing it because it’s been a long time.”

The likes of Iffy Onuora, Terry Connor, Kieron Dyer and Titus Bramble have all spent time coaching across England’s different age groups and Campbell believes it is a step in the right direction.

“Now, they’re welcoming everybody into the fold and there’s also some more players to come back who are retired or are retiring to do their courses and see what’s happening,” he said.

“The more (BAME) guys who qualify for their coaching badges at B, A and Pro, the better it is. The main thing is that the pathways are there and that’s key and the FA are addressing that.”

Campbell said the England set-up had undergone “massive change” since he won the last of his senior caps in 2007.

“It’s been an eye opener but I’ve really enjoyed it,” he said. “There’s the games and things like that, but there’s a lot of stuff behind the scenes which the FA put a lot of effort and funds into.

“Things like psychology and making sure the players are on it, everything from diet and support staff and things like that, it’s a lot of stuff for Under-21s.”

Campbell, who also made nearly 100 appearances for Portsmouth and had brief spells at Notts County and Newcastle, added: “The best moment for me was when I actually got on the pitch and I was a part of the sessions.

“There’s things you have to do yourself and it’s given me the confidence to know that I’ve got the tools, but I just need to get a situation and a nice gig somewhere.”