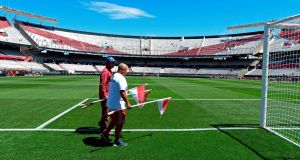 The second leg of the Copa Libertadores final will take place outside Argentina and not at River Plate’s Estadio Monumental. Photograph: Alejandro Pagni/AFP/Getty

The second leg of the Copa Libertadores final between Buenos Aires rivals Boca Juniors and River Plate will be played outside Argentina on either December 8th or 9th, South American football’s governing body Conmebol has announced.

Billed as the biggest club game in South American football history, the second leg was twice delayed on Saturday, postponed until Sunday and then called off following an attack by River Plate fans on the Boca team coach.

With the tie poised at 2-2, Boca players were left injured by shards of broken glass and affected by tear gas, which was fired by police to disperse the crowd outside River Plate’s El Monumental stadium.

It had been hoped that the final of the South American equivalent of the Champions League, the first between Argentina’s most famous clubs, could be completed on Sunday, but Boca asked for another postponement, as some of their players were still suffering from the after-effects of the tear gas.

Having summoned the bosses of the two clubs to Conmebol’s headquarters in Paraguay on Tuesday, confederation president Alejandro Dominguez issued a statement to say a decision on whether the game will be played in either two Saturdays’ time or the day after will be made by its disciplinary committee.

The statement did not say where the final would be played, but Dominguez told a press conference afterwards that the game would not take place in Argentina.

Several potential venues have been suggested by the South American media, with Miami, Paraguay’s capital Asuncion and the United Arab Emirates among the possible candidates.

It has also been reported that Boca formally asked Conmebol to disqualify River Plate and award them the trophy — a request the confederation has appeared to decline.

Crowd trouble in South American football is hardly new and the two legs of the final were scheduled to be played without away fans, as their safety could not be guaranteed.

But the scenes from the weekend were deeply embarrassing for Argentinian football, particularly as the country hopes to lead a joint bid for the 2030 World Cup with Paraguay and Uruguay, a tournament that England, Ireland, Northern Ireland, Scotland and Wales would like to host, too.