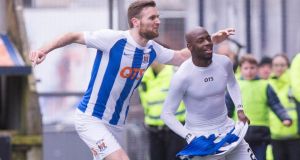 First-half injuries to central defenders Dedryck Boyata and Kristoffer Ajer disrupted the Hoops, who were stifled on the artificial surface by the hard-working home side.

Kilmarnock were rewarded in the 70th minute when Mulumbu volleyed in a Jordan Jones cross to give Killie their first home win over the champions since 2010.

And while Celtic boss Brendan Rodgers will hurt from an unexpected defeat – only his second against Scottish opposition – with the first leg of the Europa League tie against Russian side Zenit St Petersburg at Parkhead less than two weeks away he will be concerned about a growing injury list.

Minutes before the transfer window closed on Wednesday night the Northern Irishman had signed 22-year-old centre back Jack Hendry and he made his debut as part of a back three, while attacker Charly Musonda – on loan from Chelsea – started for the first time.

There were only 10 minutes gone when Rodgers had to reshuffle his defence for the first time.

Belgian defender Boyata went to ground after blocking a cross from Eamonn Brophy, back in the side along with veteran centre back Gordon Greer, and limped off in some frustration to be replaced by Nir Bitton.

Celtic’s impressive early start gave way to some struggle as the well-organised Ayrshire side closed out all avenues and when Ajer was unable to recover from a leg injury he was replaced in the 35th minute by winger Scott Sinclair, with left back Kieran Tierney moving into central defence.

Some much-needed goalmouth action then ensued. Celtic midfielder Olivier Ntcham fired a 25-yard free-kick on to the roof of the Killie goal before Greg Taylor drove wide at the other end after Hoops goalkeeper Dorus de Vries had spilled a Jones effort.

The Dutchman then saved an angled drive by Rugby Park skipper Kris Boyd.

Kilmarnock goalkeeper Jamie MacDonald pulled a Sinclair shot out of the air in the 54th minute as Celtic upped the tempo after the interval.

The complexion of the game changed however, with 20 minutes remaining when the unmarked Mulumbu was picked out by Jones and from eight yards out guided the ball past De Vries for his first Killie goal since arriving in November.

The 31-year-old former Norwich City and West Brom player removed his shirt amid ecstatic celebrations for which he was booked by referee Kevin Clancy.

Rodgers threw on Odsonne Edouard for Eboue Kouassi and Celtic stormed forward in search of the leveller but Killie should have increased their lead.

Jones blasted over De Vries’s bar in a breakaway before Mulumbu had a drive blocked by the Parkhead goalkeeper, who then saved another effort from Jones.

MacDonald saved a late free-kick from Ntcham and the determined home side held out the three added minutes.

1 Cam Newton broke the mould: Can his flame be rekindled at the Patriots?
2 The Game Changers: Vincent O’Brien, a pioneer who took Irish racing to the world
3 The unsolved mystery of Goran Ivanisevic’s stunning Wimbledon win
4 Tuilagi case shows England’s home-based clause is out of date
5 UK Sport to investigate ‘deeply troubling’ gymnastics abuse allegations
Real news has value SUBSCRIBE
Crossword Get access to over 6,000 interactive crosswords